I just attended your lecture in San Francisco. I wanted to ask this, was the illustration of Saturn that was embedded in the text created as a piece of type or a woodblock? Were the embedded images in the book printed with the text or separately?

Here is what I showed in the class.

The 2 images of Saturn were almost certainly printed right along with the type.
Like the type, the images are in relief (that is, the inked part is raised and pressed
into the paper). The images were probably carved in relief on a small woodblock,
although possibly the simple design was cut in relief in lead.

Here are the comments in my Beautiful Evidence on Galileo's 2 saturns, along with references:

Does anyone know what the e's and a's with the long tails at the end of some of the lines are? Were they just places where the printer needed to justify the line? They're certainly very distinctive.

My guess is that the long tails at the end of some lines are to fill (or justify) the line optically, and to support physically the line of type at the end of the line as it presses against the paper. Thus the overall type-image on the page is a complete uniformly supported rectangle. Without surrounding support, isolated pieces of type (page numbers, running heads) tend to punch through the paper; perhaps the eaten-out edges of an unjustified line would have the same unfortunate effect, for a ragged line might tend to skew or dig into the paper.

This effect would occur when hyphenation didn't work to fill the end of the line, likely to occur with a vowel preceding a longer syllable that would not fit in the gap at the end of the line. Thus "a" and "e". There is, in the page-images above, also an "n" with a tail.

Is the tail a separate typographic element (somewhat clunky) or a specially designed character "a-tail" or "e-tail" or "n-tail"? Note the tail does touch its adjacent letter, like a ligature. Sometimes long tails are decorative; the capital "R" and "Q" provide opportunities for a long-reaching decorative tail sweeping low to the right but, one hopes, not colliding with an upcoming descender.

In early manuscripts, before printing, now and then the scribe drew ornaments to fill the gap at the end of a line that fell short, creating the appearance of a justified block of writing. And sometimes those ornaments looked like sparklines! I'll try to find an example to post here.

These are my speculations. Surely an expert in printing history knows the real story.

I found another of Galileo's books, an algebra primer, in which he used another visual noun, in that case a simple circle to indicate a sphere, as I recall. I need to get up to the special collections at Nimitz Library to take pictures.

One of the most striking features of Galileo's observations of Saturn's rings was his use of images in place of words; the image became the language. And it appears that Wolfram Mathematica supports the same images-as-language view of the world, with interesting and even useful results:

In a nutshell: the image becomes an operand of the mathematical programming language at the heart of Mathematica. Galileo showed us how to talk to people with images as language for conveying science, and 400 years later people can use images as language in computational science.

Can simplified, programmatic mathematical analysis of telescope images be far behind?

Unicode provides a similar idea. You can define custom Unicode characters that can be any kind of glyph. The Unicode standard allows one to define up to 137,468 custom glyphs. These glyphs can be sized and styled just like any other alphanumeric character or punctuation.

More information is at http://en.wikipedia.org/ wiki/Mapping_of_Unicode_characters#Private_use_characters

An example of a Unicode glyph is at http://unicodesnowmanforyou.com/

I just wanted to provide a follow-up to Dan's question and to elaborate on ET's speculative reply regarding the "long tails at the end of some of the lines."

There is practice in the Arabic language known as keshide, a justification method in which the last letter of the last word on a line is stretched in order to achieve left and right alignment, or as ET mentions "the appearance of a justified block of writing."

This method was brought to my attention through some research I am conducting on web content localization.

Could it be that Galileo was familiar with and borrowed from this Arabic practice?

I just ran across this example of a symbol-as-noun inserted inline with text (see image attached). Interestingly, it is used here rather casually.

I wonder if the fact that this is an essay in comics scholarship led the author and the journal to use the symbol instead of words? Or is it that we apparently don't have a concise name for this object, other than the symbol of Venus, which some readers might not immediately get?

The tiff image I attached to my last reply seems to have some trouble loading. I'm attaching a JPG version here. I would have preferred it be embedded in the post itself, but I could not figure out how to do that.

Thanks for this interesting thread. I'm hoping others will contribute graphic "words" they find.

Here is a great example from contemporary publishing that integrates music notation directly into text. The rhythmic figures themselves appear as nouns in the excerpt below. Naturally, the audience for this book would be familiar with this music notation. The first two graphic images replace clumsy language such as “eighth‑note and dotted quarter‑note” and “dotted eighth note and sixteenth‑note tied to quarter‑note” respectively, with their music notation counterparts, right in the text itself.

Here is an example of Rockwell Kents illustrated work on Candides' Voltaire. In 1928 the first book published under the then new Random House imprint was a Rockwell Kent illustrated edition of Candide.

See also his work on Moby Dick (http://www.fedpo.com/BookDetail.php?bk=232) that shows integration of line art and text. 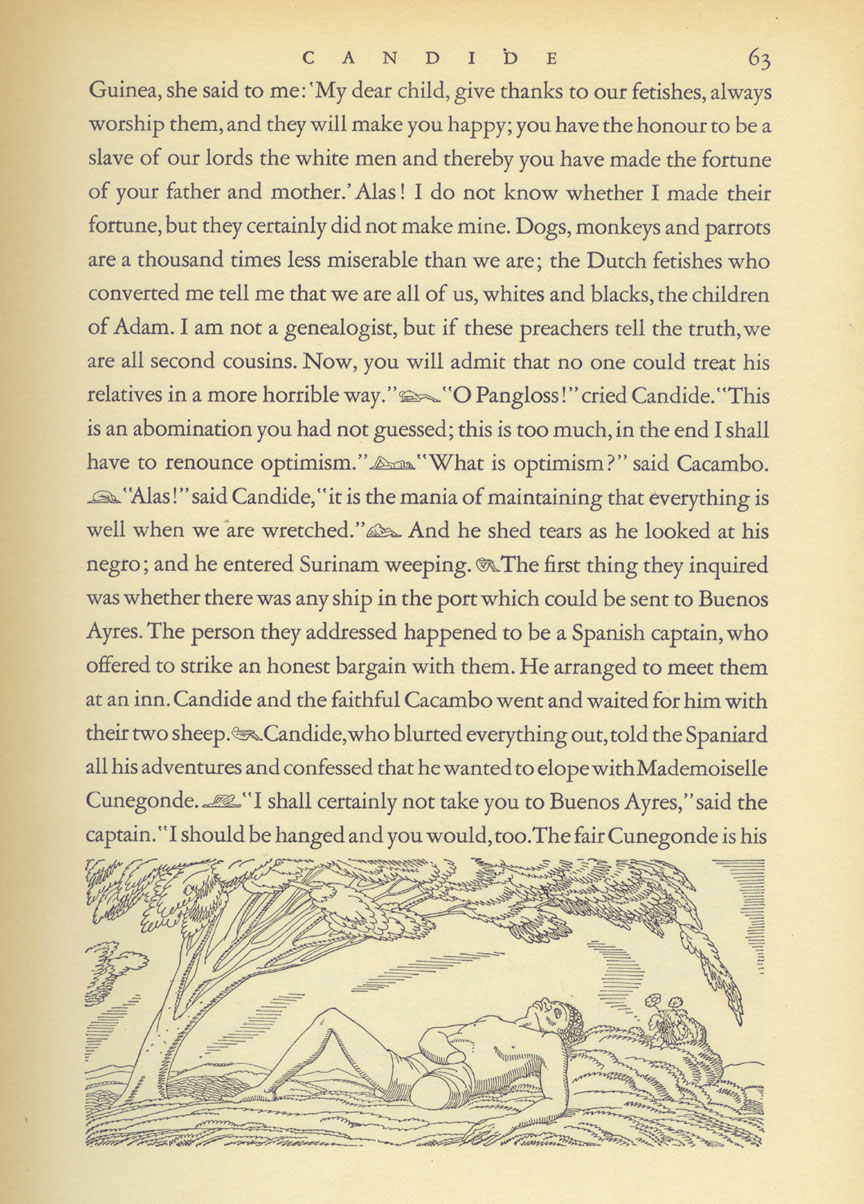 I am working on an illustrated book based on the volumes that are scanned into The Internet Archive. I have found that it is an unusually rich source of high quality visual materials if you are prepared to search a little bit (I have found that using broad search terms such as "graphic" and "pictorial" uncovers the best material).

For example, here is Satsugu enso Roku, a stunning Japanese volume on tobacco growing from 1881.

The following notes are included in the volume:

This is a scientific work of that period and covers all phases of tobacco culture. It completely illustrates and discusses such subjects as morphology of the tobacco plant, planting, handling and care of seed beds, transplanting, weeding, use of wheat as a "nurse" crop, insect pests, tobacco diseases, harvesting, curing, etc. There is also an interesting illustrated section on the history of smoking.

The well known American botanist H.H. Bartlett says that "It is probably as interesting a monograph of a single crop plant as any nation could show at the same time."

It is lavishly illustrated with 156 figures in colour, most of which occupy a whole page, and many are tipped in and folded. Some of the illustrations of tobacco leaves are in natural size. Some of the illustrations are interesting from the view-point of printing. From a note by the author it seems that the outlines were printed from metal, colors were added with wooden blocks and some of these were overprinted by lithography for improvement. Bartlett says, "All in all, the printing of this copiously illustrated work with its effective coloring was a marvel of technical ingenuity".

There is a ten - page English summary.