The Visual Display of Quantitative Information presents a small multiple for 9 OECD countries
of their time-paths moving through a 2-dimensional space of inflation by unemployment.
This design locates changes in time in a more interesting space than the routine time-series
of simply Y against time. 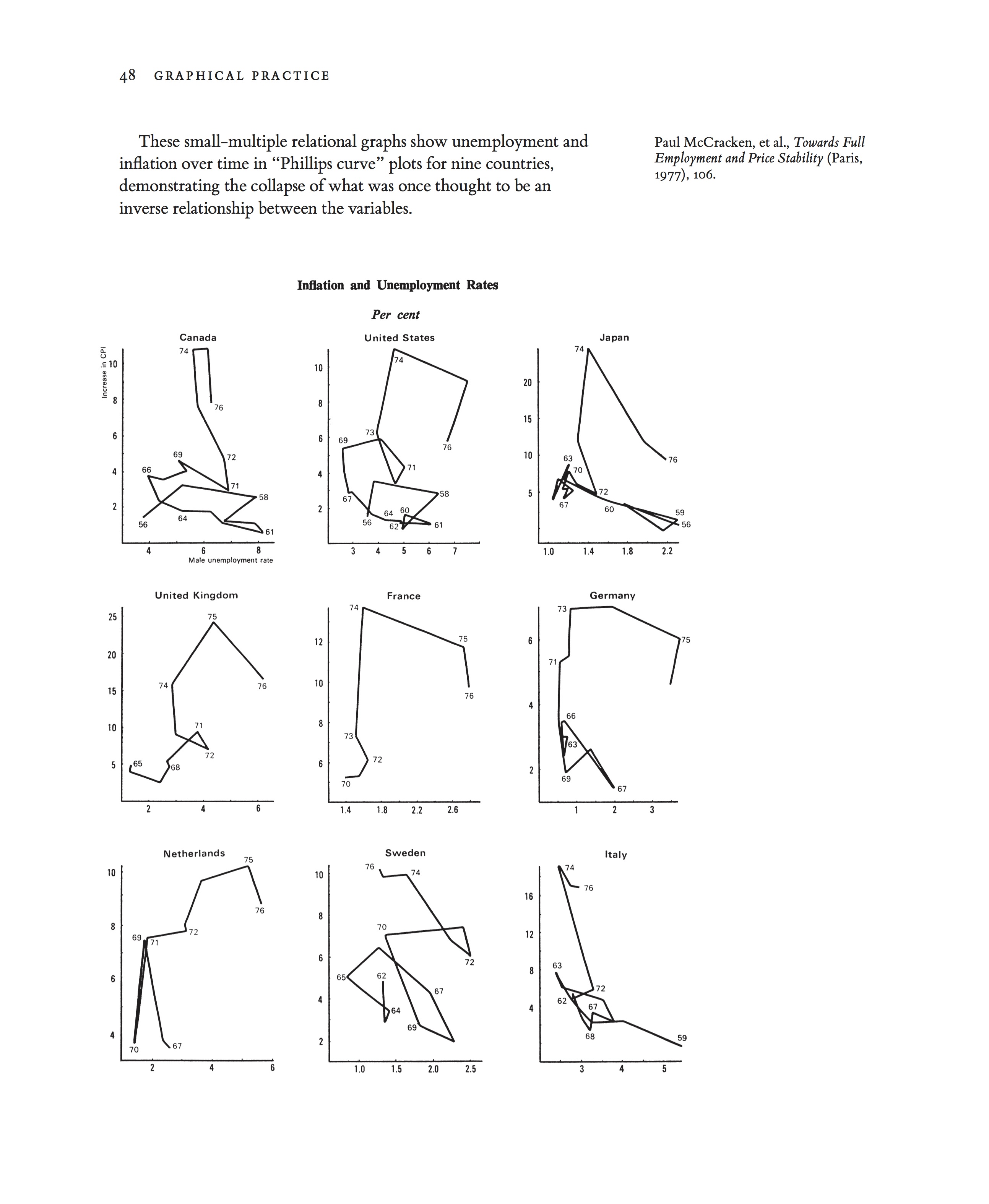 With only ten years of data for a single country, there appears to be an inverse relationship between the inflation rate and the annual unemployment rate. When over four more decades of data points added to the small multiple presented in The Visual Display of Quantitative Information, we see this supposed correlation collapse even further. Rather than a series of neat curves, we see a tangled mess for each country.

Unemployment rate is defined as the annual average of percentage of labor force that is unemployed, where the "unemployed" are defined as people of working age who are without work, are available for work, and have taken specific steps to find work. This definition allows for more accurate international comparisons.

Inflation is measured by the percentage changes in the prices of goods and services that households consume (consumer price index, or CPI). Even though they measure only consumer inflation, CPIs are commonly used as a proxy for the general rate of inflation. 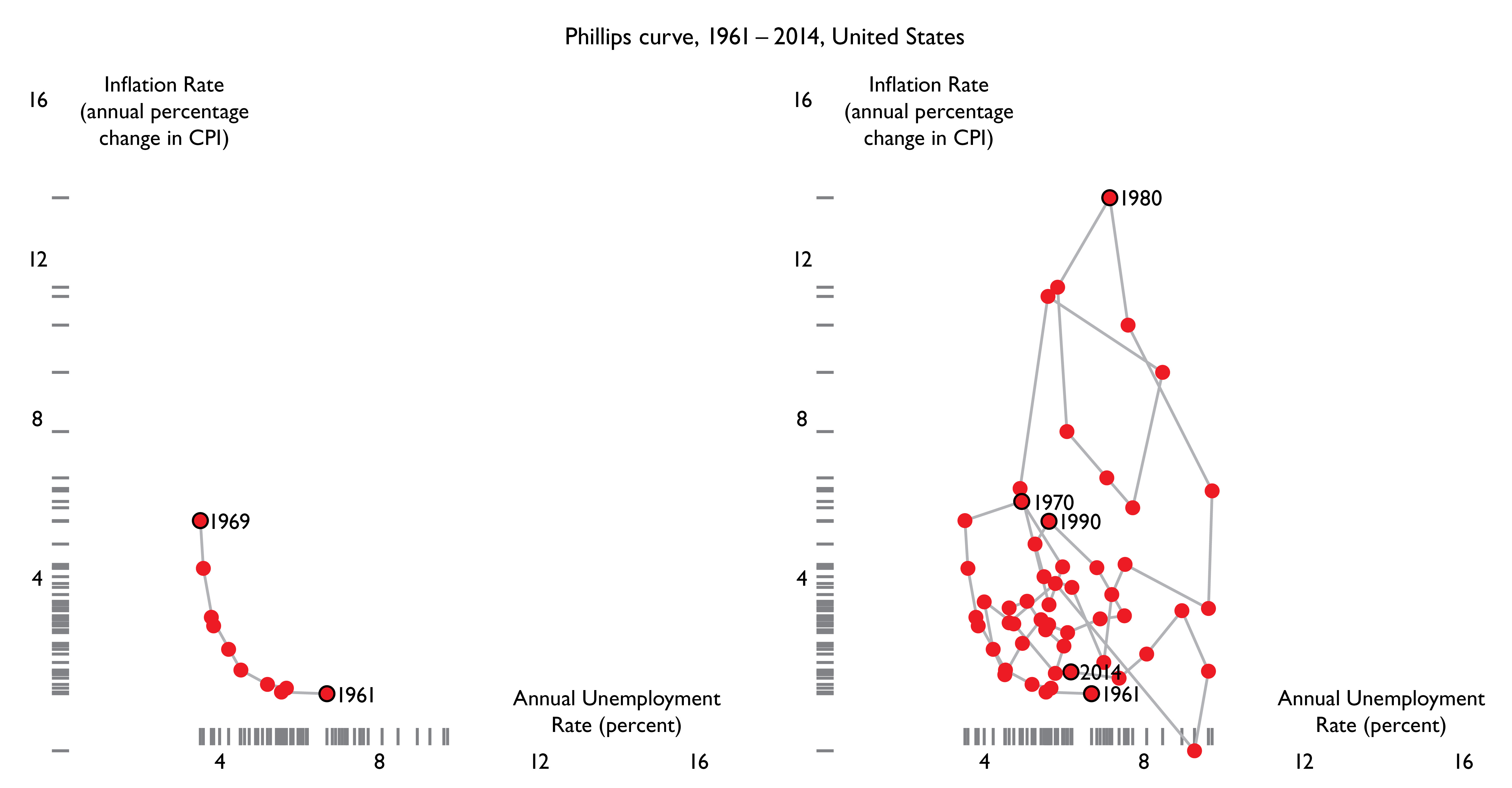 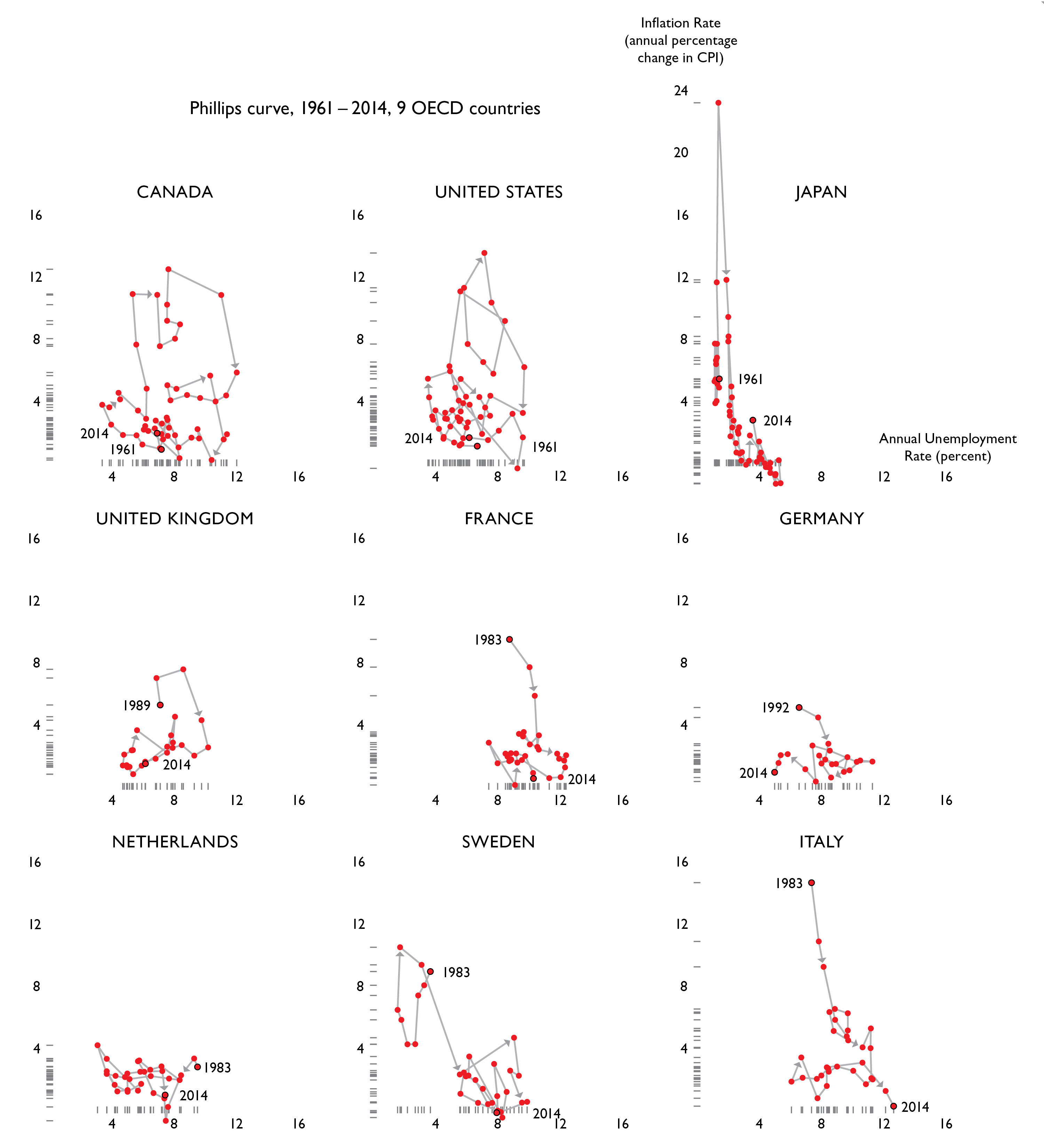 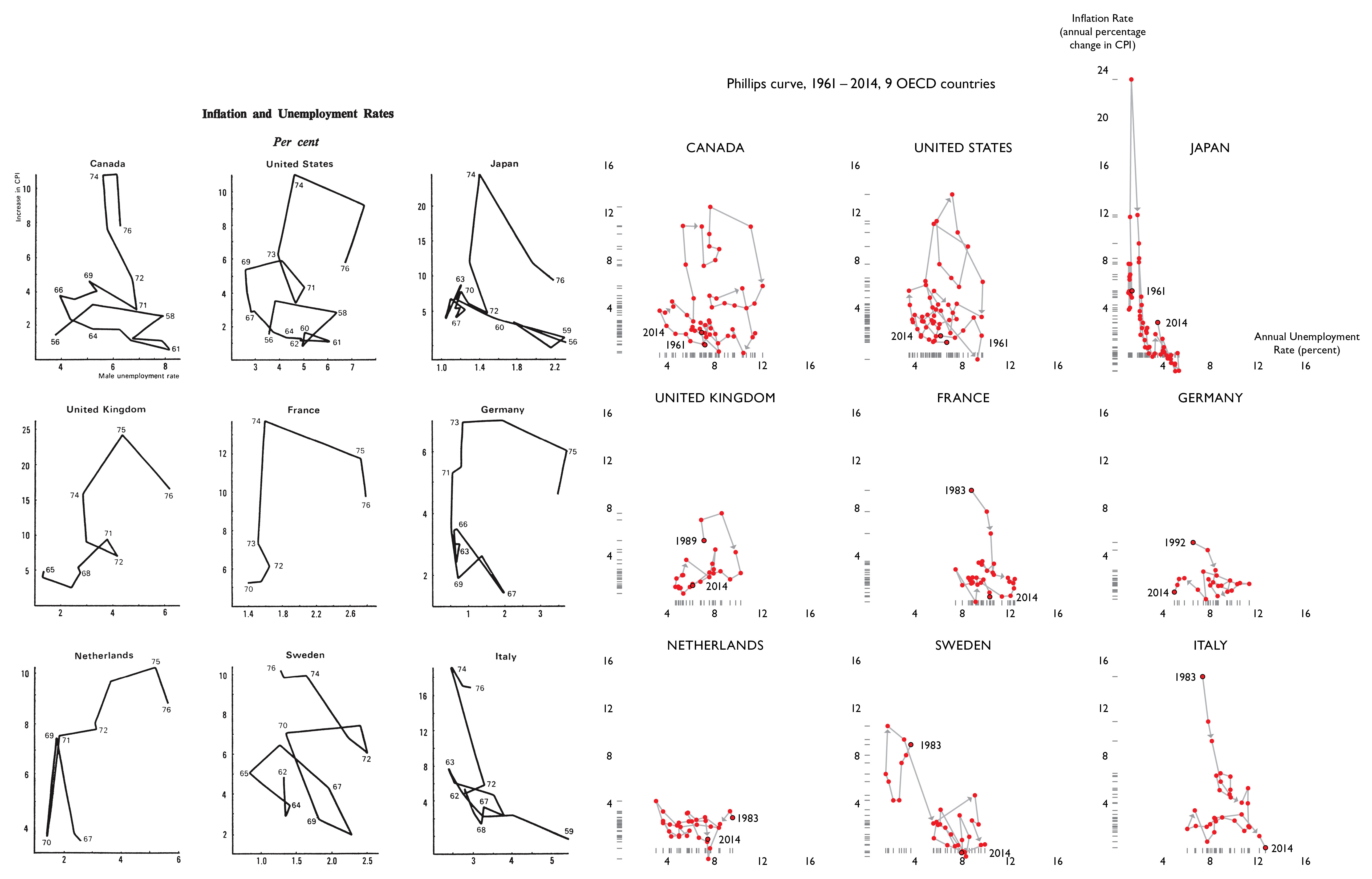 Recently Benjamin Morris of fivethirtyeight did a fine display of Stephen Curry's
path of 7 seasons through an intriguing basketball space - successful shooting %
against attempted shots per 100 possessions. His season-by-season progress moves
toward the upper right corner, the area of more shots and greater accuracy. If you
make the shots, you are not taking too many.


Source: Stephen Curry Is The Revolution


Maps, of course, show all sorts of time-dependent events (weather maps,
for example) in Earth's latitude by longitude two-space. But the big
historic step in data graphics was to move beyond representing natural
physical spaces to abstract spaces (such as inflation by unemployment),
a change that took thousands of years. From my Visual Explanations, p. 14-15:

For the United States, 1961 to 1969, there was an apparent inflation/unemployment
trade-off between inflation and unemployment - as inflation declined, unemployment increased.
This immaculate curve for 1961-1969, a 2-dimensional time path, was swamped by the
next 45 years of data, a period with several large economic shocks. No obvious
trade-offs are seen for 1970-2014:

This small multiple below shows time paths in inflation/unemployment space
for 31 countries for up to 54 years. Countries are ordered by a "misery index"
= sum over all years of inflation + unemployment percents for each country.


The information design strategy:
once you have an interesting plot, small-multiply it,
in effect making a data element of each plot.


What we have learned from these comparisons:
economic matters are more complicated than U.S. Phillips Curve early returns suggested. 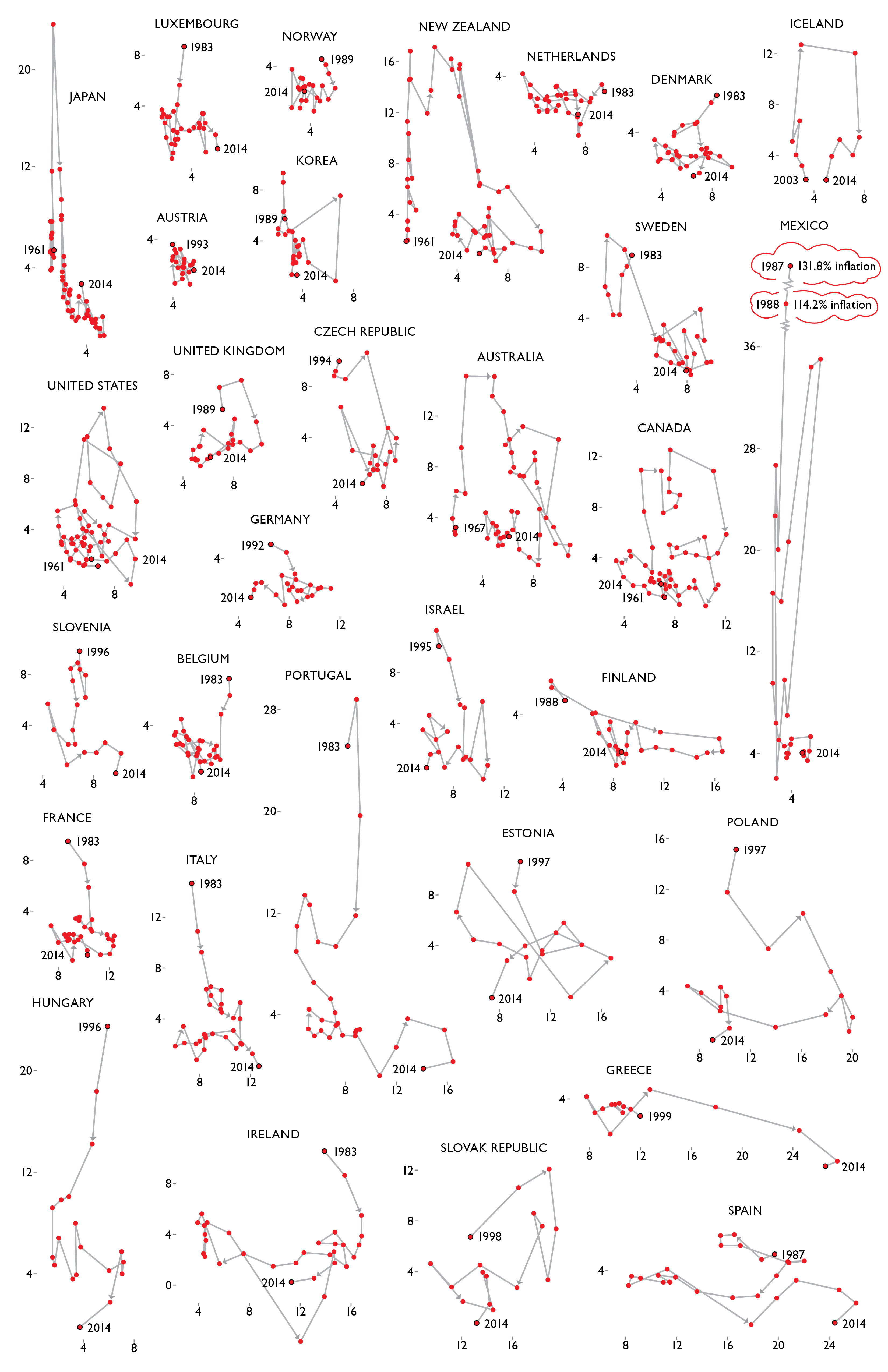 The field of chaotic systems has developed fascinating ways to visualize temporal patterns. On such example is the 'return map,' devised by Robert Shaw in the early 80's. A return map is used to visualize a series of discrete events, which can be irregularly spaced over time. Return maps are scatter plots, where each data point point corresponds to an event. An event's x-coordinate is the time elapsed since the previous event. The y-coordinate is the time until the next event.

Attached is a return map of tweets from the @WhiteHouse. The points are also color-coded by the time of day. The axes are scaled logarithmically, allowing us to see patterns across several timescales. Interestingly, the return map reveals two modes of behavior. In the 'business as usual' cluster, a tweet is written roughly every 10-20 minutes. But during major events, tweets are generated once every few minutes.

On Twitter, #time_map_viz has applications to call center activity, yoga lessons, and even chords from Beatles songs.