This is not a question but an observation.

In the movie of Galileo's sunspot illustrations I was struck by the gap in the data. Not so much that the weather was bad on that day but that Galileo had the integrity not to fudge his results.

The website (by Albert Van Helden and Elizabeth Burr) on Galileo is superb,
a model for a teaching and research site. It presents a great amount of material
about Galileo and about science in the 17th century.

My students in evidence design at Yale over the years have also made sunspot
movies, scanning the original engravings from Galileo's Istoria e dimostrazioni
intorno alle macchie solari (Rome, 1613). I show one of those student movies
in my one-day course.

I can't help but contribute this stunning animation of the sun in rotation over a six day span. Having just participated in Tufte's course in New York, compared to Galileo's sunspot movie, this animated gif is particularly interesting.

Other stunning photos of the sun, including close up images of actual sunspots, can be found on the Big Picture blog

400 years after Galileo's sunspot explorations - the first high-resolution images of the Sun have been returned from NASA's Solar Dynamics Observatory (SDO), which was launched in February.

Beautiful and unseen till now.

A filament at a wavelength of 304 angstroms 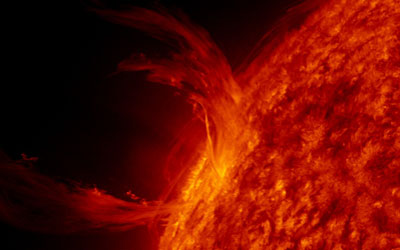