In a curious sort of information design, salmon farmers apparently choose the desired orangness-pinkness of their product from a color chart (SalmoFan) provided by Hoffmann-LaRoche which supplies the food dyes to color farmed salmon that would otherwise be gray, khaki, pale yellow, or pale pink. The SalmoFan is in tomorrow's New York Times, "Farmed Salmon Looking Less Rosy."

Note the cute fins on each SalmoFan color chip.

This story in the Times takes on immediate personal interest because tonight we made fresh salmon homebrew sushi for dinner. A leftover piece, held up to the screen, falls about 6 color chips in from the right on the SalmoFan color wheel (assuming accurate monitor color, currently calibrated in the faint WYSIWYG hope of corresponding to CMYK printing on paper).

Or maybe it was wild salmon tonight. Which poses its own environmental concerns.

Below are various scientific measurement tools to assist in the assessment of SalmoFan™ Lineal.

Careful research protocols are now being prepared for submission to the Salmon Subjects Review Committee at the Graphics Press World Headquarters Research Laboratories. Upon obtaining the necessary approvals, we will proceed with control-color studies and field testing of the SalmoFan™ and, of course, the SalmoFan™ Lineal.

Above a comparison of Pantone colors, the SalmoFan, and homemade gravlax (from Atlantic salmon)

The SalmoFan Lineal in action at our test laboratory:

Note that several relevant variables in this image are out of control. The angle of light falling on the SalmoFan Lineal differs substantially from the angle of light falling on the Atlantic salmon. The measurement tool and the specimen should, of course, be on the same plane or very close to the same plane. In addition, the film is not adjusted for the warmth of the halogen lighting in the test laboratory and so, for example, the white cutting board appears distinctly orange. (And why assume that the film miscalibration has a uniform effect on the array of relevant colors in the experiment?) Despite these flaws in experimental design, the resulting sashimi was excellent.

Tonight our World Headquarters Test Laboratory was visited by Dr. Jorn Scharlemann of the Conservation Biology Group, University of Cambridge. Promptly demonstrating the virtues of international scientific collaboration, he pointed out the following, as mentioned at the San Francisco Zoo website: "In the wild, flamingos eat algae, crustaceans, brine shrimp, diatoms and aquatic plants. At the Zoo, a special 'flamingo fare' is served, a commercially prepared diet. To preserve their rosy color at the Zoo, they are fed a diet high in caratenoids. Initially, zoos fed carrots, red peppers and dried shrimp, but today it has been found that if synthetic canthaxanthin is added to this, nesting and breeding is more successful."

The scientific implications are astonishing; this cross-order, cross-species analysis finds enormous communality between salmon farmers and zoo-keepers--busy with doses of canthaxanthin (or similar) for fish and flamingos!

A new use for salmon coloring: to test if wild salmon is actually wild. As Marian Burros devastatingly reports in the New York Times ("Stores say wild salmon, but tests say farm bred"), 6 of 8 samples of salmon recently sold in New York at up to $28.99 per pound as "wild" were in fact farmed salmon, as revealed by testing for additive carotenoids. This is why so much "wild salmon" was available off- season, from November to March.

How about blind taste-testing that compares farmed and wild salmon to see if renowned chefs can detect any difference? Blind wine-tasting indicates that sometimes it is hard to tell the difference between red and white wine (as reported in witty essay by Calvin Trillin).

This news story uses a good diversity of evidence in doing detective work.

Calvin Trillin's essay for The New Yorker, "The Red and the White."

He doesn't ask in advance if I'd prefer red or white--presumably because he knows that the question would give me the opportunity to say, "But can anybody really tell the difference?"

Why? Because, as best I can remember, it was from Bruce or one of his acquaintances in the Napa Valley that I first heard about the color test given at the University of California at Davis, whose Department of Viticulture and Enology is renowned in the wine world. I got the impression that the Test was often given to visitors from the wine industry, but since this was about twenty years ago, such details are hazy. I was definitely told, though, that the folks at Davis poured wine that was at room temperature into black glasses--thus removing the temperature and color cues that are a large part of what people assume is taste--and that the tasters often couldn't tell red wine from white. After Bruce returned from a short course at Davis in the mid-seventies, he had someone at the Joseph Phelps winery, where he then worked, set up a red-white test with black glasses. Bruce got three out of five.

Apparently wine-tasting is still in case studies. At this rate double-blind placebo-controlled trials are a ways off.

Two of my fellow students in a pharmacology class do investigative work for the FDA's fisheries section. Apparently the salmon dyeing is nothing compared to concerns over shrimp because foreign farms use some pretty nasty pesticides to keep the shrimp lice at bay.

Here's a picture from a dog breeder in England that, according to the web site, was "used in The Breed Standard Illustrated, to demonstrate the wide range of acceptable colour in the Golden Retriever".

Here's another picture from the same site, just because I like retrievers. Maybe it would fit better in the Dog camouflage: Whose hermeneutic shall prevail? thread but most of these dogs look all captioned out.

Here's the soil color measuring device, with instructions for its use below.

What Color is Your Urine? 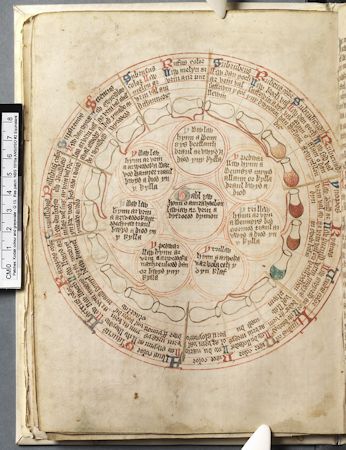 Hello Tufte crew! I hope this is not an incivility. This thread is the reason the Internet was invented. 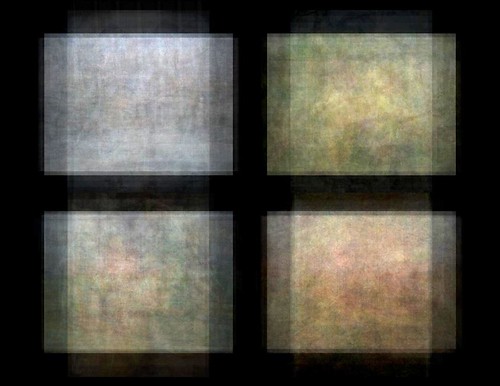 This is a compilation of 200 photographs, 50 each tagged with "winter" "spring" "summer" and "fall" (left to right, top to bottom) in flickr, selected and combined algorithmically. One of 12 images in brevity's 50 people see ... set. I love the impressionistic shading and the subtle diffences in hue between seasons.

Many things are mixtures of similar colors, not a color

All these new contributions are superb, greatly extending the range of field color research.

Here's another problem in field color, the problem of mixtures of colors. An architect friend of mine had some clients who wanted their kitchen "toast color." Well, toast is many different colors. Similarly, I once wanted our house painted the color of straw; upon realizing that straw is many different colors, I wondered if we could glue a thin layer of straw to the sides of the house.

E.T.'s point about the real thing not having "a colour" reminds me of a feature of some of Professor Jack Cohen's biology lectures, where he asks the audience to call out the quality that owls have. After a few cries of "wisdom!" he advances the slide carousel to a picture of three of the goofiest-looking baby owls you ever saw. He then points out the obvious fact that no real owls of any sort actually possess wisdom, that's just a bit of human cultural shorthand (and that of one particular human culture: the Inuit associations of foxes and owls, for example, are with different qualities from ours -- the fox is brave, not sly).

When people say "toast", "straw", "salmon-coloured" and "river", they usually expect their listeners to infer the stereotypical colour, and they're usually not so wrong to expect that. Growing up by the Thames, I expect real rivers to be brown, but I am much less likely to fail to interpret a blue meandering line on paper correctly, as the representation of a river, than I am a brown meandering line.

(The Harry Beck Underground map bears me out -- blue Thames.)

Here's a Pure Vermont Maple Syrup Grading Sampler I got in Texas. It took some experimenting to capture a reasonably reproducible shot. The Navy uses a very similar procedure for daily lubricating oil analysis. The Pure Vermont Maple Syrup Grading Sampler, regretfully, did not come with a fifth empty bottle in which to pour your own sample for analysis.

*I suspect the redness in the shots is due to fluorescent flicker.

In trying to find a picture of the Navy's clear-and-bright test for oil, I ran across this picture grading copper corrosion, courtesy of Alcontrol Laboratories:

Just happened to be looking for blood smears of anemias, and came across this on Flickr. It is well known that anemia can be seen in the eye lids, but, at least in humans, the distinction is typically "pale" or "pink". Pale bad, pink good. I had no idea that someone had devised such as thing as a FAMACHA score. 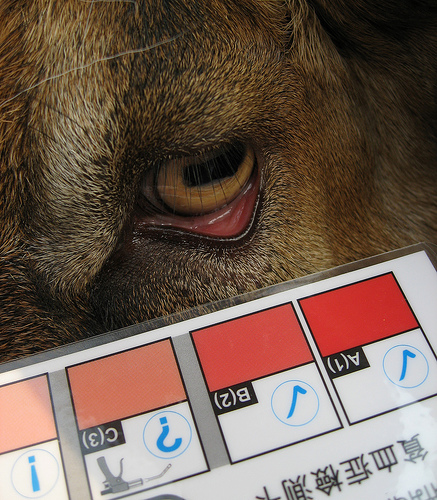 As a former bio-optical oceanographer, I would be remiss if I did not contribute one of my favorite classic oceanographic tools to this excellent discussion. The Forel-Ule (FU) scale dates back to the 1890s and is used to gauge the transparency and productivity of marine and fresh waters. While digital sensors are more commonly used for the task of measuring ocean color and turbidity these days, the FU scale remains an excellent teaching tool; it demonstrates ocean color concepts in the field in a way that digital data can not. An excellent review of the FU scale is here.

A Forel-Ule scale contains clear vials of variously colored liquids that are held up to the water body for visual comparison. Here is a photo of one version of the scale: