anyone have any information on the type of information display used by the various Formula One race teams? As fans know, the mechanics, engineers and team manager are able to receive real-time data from a variety of sensors on the cars, and I believe that the teams are once again allowed to make active adjustments to the cars while on the track.

Given the massive amounts of multivariate data, compounded by other factors such as weather, track conditions, competitors, etc, I would imagine that tremendous effort has gone into the data display, especially when one considers this must all be interpreted for a car racing around a circuit.

Wired magazine did a good article the other year, but there wasn't any information on the information displays.

Take a look at Telemetry at:

A Google search for "data acquisition racing" will point you to some comercial software for auto racing.

Thank you for the link to the Williams' page. The explanation as to how the data was used was a bit thin besides mentioning that the drivers see the same display while sitting in their cars during qualification. I assume that the data can be compared against an "ideal" lap, and then the driver could see, for example, that he was braking or downshifting too soon before a particular corner. Some console racing games mimic this by providing a "ghost" of a player's earlier, best race against which he can compare himself.

In addition to the data provided on the Williams' page (engine revs, speed, steering, gear) are there any examples of the other data that the engineers and mechanics might be interested in, e.g., engine performance, oil pressure, wing loads, etc.?

Any systems available are likely to still be in their infancy, and i wouldn't imagine they're much beyond pure data loggers.

As recently as October 2001 I had a final year student working on just such a system for the Minardi team. At that point although you had checkpoint data being recorded, he was astounded to discover that the "visualization software" consisted of the head coach with a stop-watch and pen & paper. There is some speculation that were such software to become common, the upper formulas would probably legislate against its use (just as they do for computer augmentation of the cars themselves). A 1 second increase in laptime equates almost perfectly to an additional $1,000,000 in sponsorship, so the stakes are pretty high.

Well, you are talking about Minardi :-)

For consumer use, the following site, http://www.formula1.com, posts data during the Formula 1 practice, qualifying, and race sessions on the live timing page. I don't know how long they keep the data up - currently the data for the Silverstone race is on display. When a session is in progress, the data is streamed over the internet, so that it is constantly updated.

For the race, the first display lists the drivers in classification order with information on their sector and lap times, the gap between the lead driver and the others and between a car and the one behind it, whether a car is in or out of the pit, and - by color coding - if thedriver has set a personal or track record - and more.

The second display lists the drivers in order of qualifying in the first column, then by horizontal lines extending to the right, plots the position of each driver for each lap. This is a particularly interesting graph, since passing is rare in F1 races (except the recently completed one), and changes of position during pit stops and the effectiveness of various pit stop strategies can easily be seen.

For both displays, there is an additional column on the extreme right that contains real time text commentary on key events on the track (pit stops, when a car is overtaken, has mechanical problems, etc.).

While it doesn't replace a TV, if you don't have the Speed Channel, it does give a good overview of the race as it progresses. If only they would combine it with streaming audio....!

Recently the UCI, the international governing body of bike racing, instituted a minimum bike weight rule. I posted the following to the rec.bicycles.tech NG:

There are at least two obvious reasons for a 6.8 kg/15 lb. minimum bike weight rule: (1) to make competition safer, by reducing the incentive to build stupid-light bikes; and (2) to make access to competition-more equitable by reducing potential benefits from insanely high-tech ultralight bikes.

I suggest a third possibility (if this has been suggested and I missed it, apologies). Because it's reasonably straightforward to build a bike that weighs at least a half kilo less than the limit, this means that riders can be encouraged to carry a variety of telemetry devices that, as long as they are attached to the bike, confer no weight penalty. Such devices could make TV and web coverage more exciting and allow both teams and officials to monitor races more closely. Possibilities include: Cameras attached to bikes, particularly the bikes of especially psychotic descenders during mountain stages; instrumentation: HRMs, clinometers (how steep was it when Hamilton blew past Ulrich?), accelerometers, power meters, microfluidic real-time drug-testing devices, etc.

I'll be shocked we don't see widespread integration of these technologies into race coverage within a year. What other telemetry streams might be included? Ideas?

Here's a plan view of each of the major international racing circuits showing track position, direction, speed, gear selection and G force simultaneously as the 'average' F1 racing car moves around the track. A plan scale would help.

Sorry to pick up this thread so late in the game, but ...

A significant amount of the high-level electronic monitoring/diagnostics/telemetry systems are now filtering down into the amateur/hobby market. You might like to take a look at some of the Stack units for example at http://www.stackltd.com/sw1.html

With specific regard to F1 technology, McLaren have long invested in a private spin-off company/division called McLaren Electronic Devices, you can find a quick overview of their telemetry analysis tools (called ATLAS) at http://www.mclarenelectronics.com/, select the 'Trackside' tab and then 'ATLAS'. PDF version at http://www.mclarenelectronics.com/mes_pdf/SW_Atlas.pdf

Each of the mainstream teams utilises similar systems, many sourced from one or two primary industry suppliers. I think though that the opinions expressed on Minardi, just prove the typical gulf between front-runners and the back markers in recent years.

BTW, if you want to get a feel for how much info is still bombarding a driver at 200mph, take a look at the complexity of a current F1 steering wheel, where all of the system functions---yes I mean system, car downplays the actuality of these machines---are accumulated to the wheel (McLaren example at http://www.mclaren.com/interactive/wheel.htm#)

On the Stack displays, how about sparklines with normal limits, similar to the glucose example in the thread on sparklines/wordgraphs?

Funny, I found this page while trying to find out more about Ferrari's track position visual system which I saw on SpeedTv.com's TV coverage a year or so ago. I greatly enjoy Professors Tufte's books and have applied them to charting race results in the amatuer series I drive in - e.g., http://kenlin.com/solochart/phl2004/summer04.html

In Formula racing, pit strategy is extremely important. From the little snippet they showed on TV, they use a circular graph, where each car's track position represented as a dot on the circumference of the circle. The car the team is responsible for I think is always at the 12 o'clock position. The cars are spaced by time, not distance I think. Therefore if an average lap takes 120 seconds, a competitor that is 10 seconds behind, is 30 degrees behind on the graph. I was trying to find out more about this system via "https://www.google.com/search?q=%22formula+1%22+computer+graphics+%22track+position%22&hl=en&lr=lang_en&rls=GGLC%2CGGLC%3A1969-53%2CGGLC%3Aen", which is how I got here.

For the interesting work of Magneti Marelli, see this link and go to the pdf file "Software":

which appear an ideal way to provide a quick history and a context (in a small, easy to read space) for the current reading of the state of the machine.

In my honest opinion, an interesting ergonomics interface, not for technical people, is the one available with the Ducati Data Analyzer, a device provided for customers of some Ducati models. The Ducati Data Analyzer is the first telemetric system not for the race. To this aim, the analysis software has been designed for users without specific knowledge. The interface is extremely intuitive and ergonomic. The first picture shows a comparison between two laps for three different channels. Transparences are used in order to better compare the curves. Selecting the curves it is possible to shift horizontally one lap on the other. Extremely ergonomic is the "viewport" on the bottom right of the screen, which is both a scroll bar and a zoom tool (see the other pictures). Roughly speaking, the software is a dynamic viewer for sparklines, "dynamic" in the sense of interactive. 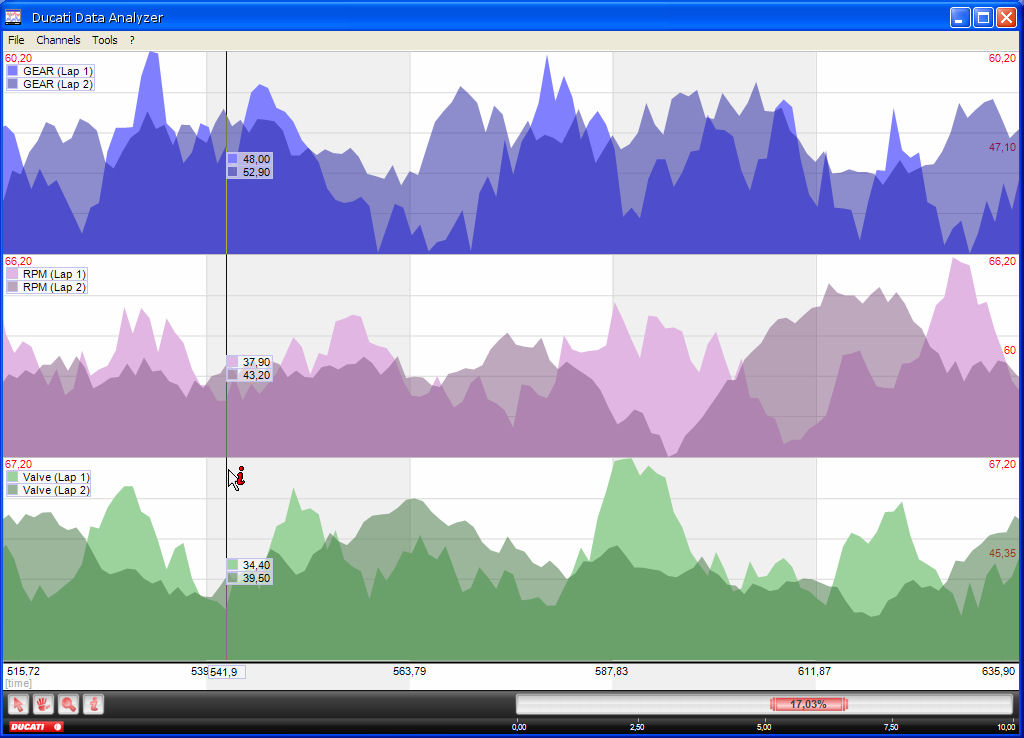 The Magneti Marelli information posted by ET in 2005 is now available at the following address: http://motorsport.magnetimarelli.com/