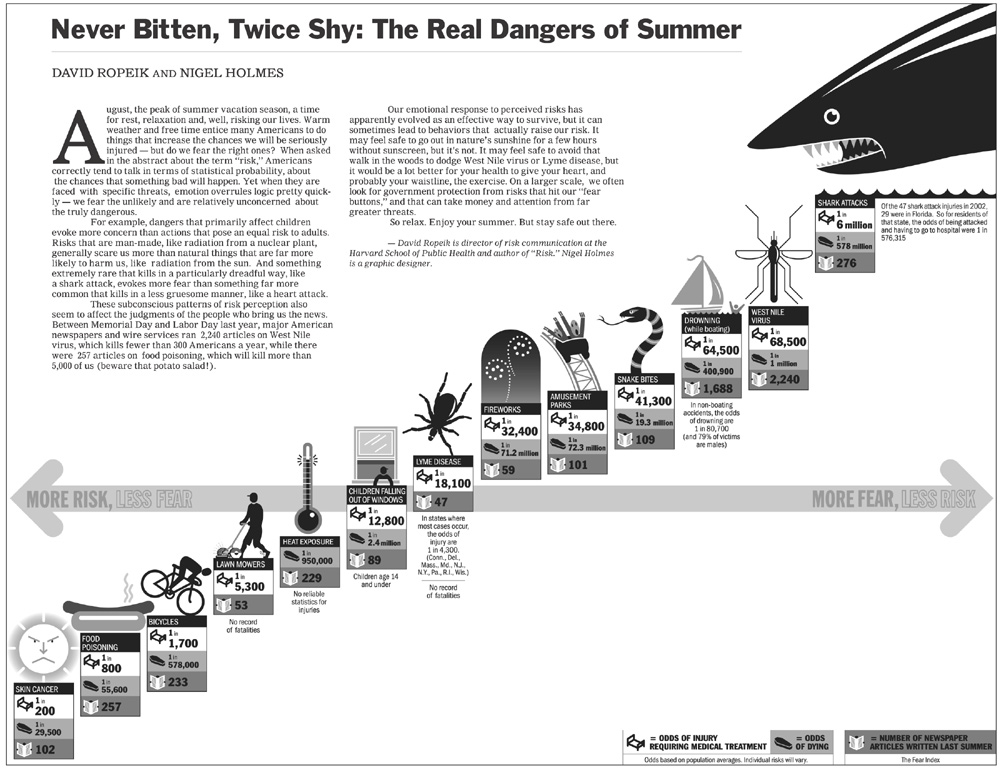 Plus, there are the chartjunky graphics of the various risky (or not) activities, as Herb noted.

However, there is one other thing about this graphic - the Op/Ed piece is by David Ropeik and Nigel Holmes, and "Nigel Holmes is a graphic designer." ET has long lobbied for the New York Times to give credit to its graphic designers, and here they have. Unfortunately, it's not a graphic to be proud of.

I redid it as a scatter plot (on a log-log scale) of no. of articles (y-axis) vs. number of deaths on the x-axis. It was better as far as I was concerned but my wife liked the original better. She felt it had impact without having to read it through.

Will Roger's famous comment that, "What we don't know won't hurt us, it's what we do know that ain't." applies here.

I think the real story is that there is no relation between fatality of threat and amount of media publicity. The Times version seemed to imply a negative relation.

I am the Graphics Director at The New York Times and therefore feel the need to clarify two things about the display in question:

1. The graphics department, which produces the maps, charts and diagrams for the rest of the paper, has precious little contact with the opinion pages, and we did not produce or edit this chart.

In fact, we don't know what the Op-Ed page is doing until it is published. For better or worse, this is consistent with the American newspaper concept of keeping the news operations and opinion pages totally separate.

2. Nigel Holmes does not work for The Times. He was undoubtedly commissioned to do the piece.

This is not offered as a defense of the display's veracity, or lack thereof, but rather as a clarification of its origins and authorship.

For a good many years now, Charles Blow has run the superb news graphics department at the Times. Take a look at today's amazing graphics on the blackout http://www.nytimes.com/ August 16, 2003. It is much better to see the paper edition; hard to view the graphics on the computer screen. And this beautiful work was done under enormous time pressure as well. See particularly the sequential map of the blackout as it moved from Ohio and across the country in about 30 seconds. Also shown are 2 satellite photographs of night lights in the eastern US: one normal, and one on Friday night.

The blackout graphics are great. Just one quick point of detail:

In the 'Sequence of Power Loss' graphic, West Virginia morphs into Maryland after a few seconds of animation.