The graphic on the earth observatory website, while visually striking, could use some work in my opinion. Why did they not add the city markers in the second graphic? Or remove the city markers completely?

I to was in the blackout and created a graphic to illustrate it.

Is there an explanation for the linear streak that appears on the blackout picture? The streak runs roughly from western New Hampshire, through southern Ontario, and ends in upper Michigan...

I think that it would be interesting to see a progression of images in small multiples for the blackout from initial image at 9:29pm on 14 August to the end at 9:14pm 15 August.

Personally, I think the green for the state boundaries is fine however that may just be my programmers bias.

The chart below is a hydrograph courtesy of ADS Environmental Services. The graph is a composite dry weather time series plot of flow, where “MGD” means millions of gallons per day. Dark green traces average weekday flows, and light green traces mean flow. Red represents the fateful day of August 14, 2003, when a power failure gripped the northeast. The marked drop in flow rate documents this very unusual day. Similar divergencies from the usual weekly flow pattern document other disasters, for example Hurricane Rita and September 11, 2001.

Note the dramatic symmetry of flows between the hours of 6:30 and 8:30 when all the measurements converge on a very narrow band of increasing flow rate. Other times of day show more scatter; however a consistent, predictable weekday diurnal flow rate is evident—with one exception.... 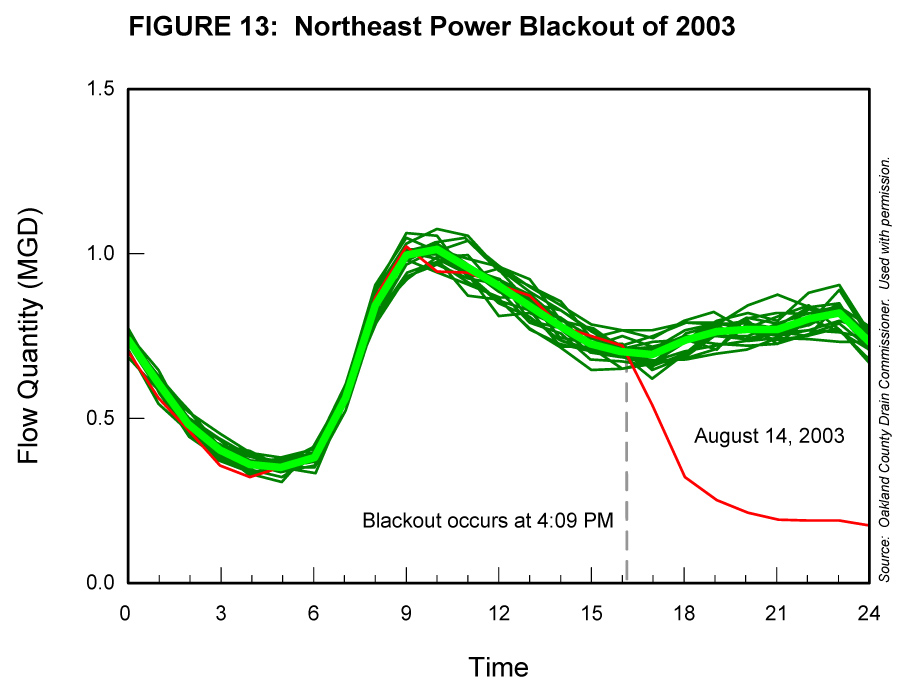 I think it only looks like a narrow band in a direction at right angles to the mean slope; since the slope is high in those hours, the flow rate looks like it has less day-to-day variation at that time of day.

If I remember right, William S. Cleveland writes about this optical illusion in <i>The Elements of Graphing Data</i>, and suggests plotting residuals in a separate graph below the first to clarify.