E.T.: I do not recall any writings by you commenting on the information design and multimedia of Eames Design. I can imagine that there must be much that you appreciate about Charles Eames' ouvre, and a few misdirections from the firm that you would gladly point out.

And if you have already published on the subject, may I ask (with apologies) for the citation?

It would be helpful to compare carefully movie and book, side-by-side. Such a comparison would hold constant the nature of the content and, as well, the quality. I've been meaning to do this for years (and failed to induce a student project along these lines). A thorough analysis would probably require both printed and video reports.

Probably the major defect of many modern scientific visualizations is their dequantification; many don't bother to show scales of measurement. Ironically, one of the first and best visualizations, Powers of Ten, deals entirely with the subject of quantity--a point missed in better than half of recent visualizations. See my Visual Explanations, pp. 20-25, on post-Eames dequantification.

One of the Eames' great strengths was their architectural background, as they worked daily, hands on, in a practical, physical, engineering, quantitative, three-dimensional world. They escaped flatland. Of course their superb eye and deep sense of 3D composition also had a lot to do with the excellence of their work.

It is altogether fitting that you should choose "Powers of Ten" to discuss. This was an exemplary work (an exemplary pair of works, as you point out) that remains in a class of its own.

It is also interesting to me, because I have used this work as a foil for thinking about problems of ecological scale. I didn't actually have this in mind when I posted my question, but your answer brings it to mind.

Where the promise of physical explanation is that it may be inferred from phenomena at any scale, there is both suspicion and evidence that some ecological phenomena are specific to particular scales, and disappear in observational jumps at orders of magnitude.

Every once in a while, I pick up "Powers of Ten" and consider how I would go about recasting the concept with reference to jumps in ecological scale. Your answer has certainly clarified one problem I've had getting this done. I have been working with the book alone, and not thinking about the film. I don't know that an escape from flatland will make my project any easier, but it would surely make it more complete.

The Eames film, "Powers of Ten" that's available now is the successor to an earlier version from Eames, which he called a "sketch" for the final film. This "sketch" version was widely available for many years, until the final version was introduced.

By-the-way, there's another version of the Powers-of-Ten concept, a short film by another filmmaker. It is called "Cosmic Zoom". I recall that it was sponsored by the Nation Film Board of Canada. No narration, as I recall, but lovely art direction dramatically took the viewer through the scale trip.

I went to Amazon.com this morning to get a copy of Philip Morrison's "Powers of Ten" (an updated edition of the original by Charles and Ray Eames). The site offered the Eames's "flipbook," and I clicked through to look at the description.

As anyone who uses Amazon regularly knows, the site runs an algorithm that recommends buying two books at once ("Better Together"). The algorithm sugggested that I purchase the "Powers of Ten" flipbook along with a copy of "Envisioning Information."

I thought that was meaningful (although I already have a copy of the Tufte). Indeed, I find Amazon's algorithm to be quite accurate -- so accurate, in fact, that I wish there were a button to click: "I already have it!" Books that I already have in my library pop up routinely in the recommendations and the "Better Together."

Actually, you can ask Amazon to improve its recommendations to you. If you have a personalized recommendations page -- which I think they create for you -- you can sign in, then under the tab for "your" store, click "Improve Recommendations." They'll show you a series of links for items they suggest, and you can note which ones you already have. Mostly, I find that they simply fill the newly open slots with different versions of the previous item, but your mileage may vary.

Surely something to interest readers of these message boards in general, and this thread in particular.

Honoring the husband-and-wife design team of Charles and Ray Eames, this commemorative sheet of 16 stamps was designed by Derry Noyes of Washington, DC, and represents the breadth of their extraordinary body of creative work, which includes architecture, furniture, film and exhibits.

I’ve always admired the molded plywood furniture—melding industry, graceful lines, comfort and practicality in one swoop. The Memorial Union at the University of Wisconsin had a small study area adjacent to the Play Circle with Eames desks and chairs—a perfect match to the Art Deco style in that part of the building, and a favorite place to study for many. The furniture was still there during my last visit around 1998. On first seeing them, a friend gasped: “My goodness! This Eames furniture should be in a museum!” Perhaps that is the point—maybe it’s a living museum....

It's kinda Zen when you think about it, if you don't think too hard.

Powers of Ten and Eames Design

The movie has its own Internet site. The site has a Flash version.

Be sure to spend some time at the Eames Gallery.

A nice (in my opinion) variation on the "Powers of Ten" is this online comic by Randall Munroe: http://xkcd.com/482/.

One of my favourite web based comic artists, xkcd, has recently completed two sketches that when combined cover (almost) the 40+ orders of magnitude you mention in your comments about the "March of Resolution" and which are comic versions of the Eames Powers of Ten video and book.

Here is a feature film by Gary Hustwit [the director of the film Helvetica] called Objectified = (http://www.objectifiedfilm.com/). The blurb describes it as follows;

"Objectified is a feature-length documentary about our complex relationship with manufactured objects and, by extension, the people who design them. It's a look at the creativity at work behind everything from toothbrushes to tech gadgets. It's about the designers who re-examine, re-evaluate and re-invent our manufactured environment on a daily basis. It's about personal expression, identity, consumerism, and sustainability.

Through verite footage and in-depth conversations, the film documents the creative processes of some of the world's most influential product designers, and looks at how the things they make impact our lives. What can we learn about who we are, and who we want to be, from the objects with which we surround ourselves?"

From the 1989 book Eames Design; The Work of the Office of Charles and Ray Eames, is a 1969 Q & A session with Charles Eames and Madame L'Amic of the Musee des Arts Decoratifs.

Here are three questions and Eames' answers that refer directly to his understanding of design.

Q: What is your definition of design? A: A plan for arranging elements in such a way as to best accomplish a particular purpose.

Q: Does the creation of design admit constraint? A: Design depends largely on constraints.

Long before Charles and Ray Eames made 'Powers of Ten' (1968 & 1977) a Dutch writer called Kees Boeke wrote Cosmic View, it was published in 1957. It also inspired the Spore computer game (http://www.theguardian.com/technology/2008/sep/14/games).

The Introduction was by the physicist Arthur H. Compton:

What are we? Where do we live? Who are our neighbors? Children and grown-ups, we all ask these questions.

The answers that Kees Boeke gives are only the beginning of the story, but that beginning is straightforward and clear. The author shows us a series of pictures of a little girl as seen from different distances. Around her are the things that form her world. We see her also as it were from within, showing the parts she is made of. These various views present one school child in an immense range of perspectives. We begin to understand how big things are and how we are related to them.

It is not easy to do what the author has done so well, to tell accurately and in simple language what the world is like. Here is a reliable framework to which further knowledge can be added. In describing this framework, the author has gone as far as the present state of our knowledge permits. Fifty years ago our cosmic view would have been much more limited. Nothing could have been drawn with confidence in pictures 20 to 26 or in pictures -8 to -14. There is reason to question whether we shall ever be able to draw what would be the next pictures, 27 or -14.

So it is that only now, in our day, we can see ourselves so clearly. In this immense and varied universe we find ourselves indeed one with other boys and girls, other men and women. In showing us how we ourselves look in perspective, Kees Boeke as a skillful teacher helps us also to know how and what our neighbors are.

The author deserves our thanks for giving us his answers to our questions in this fascinating and understandable form.

A full set of the images and text are HERE (http://ned.ipac.caltech.edu/level5/Boeke/frames.html). 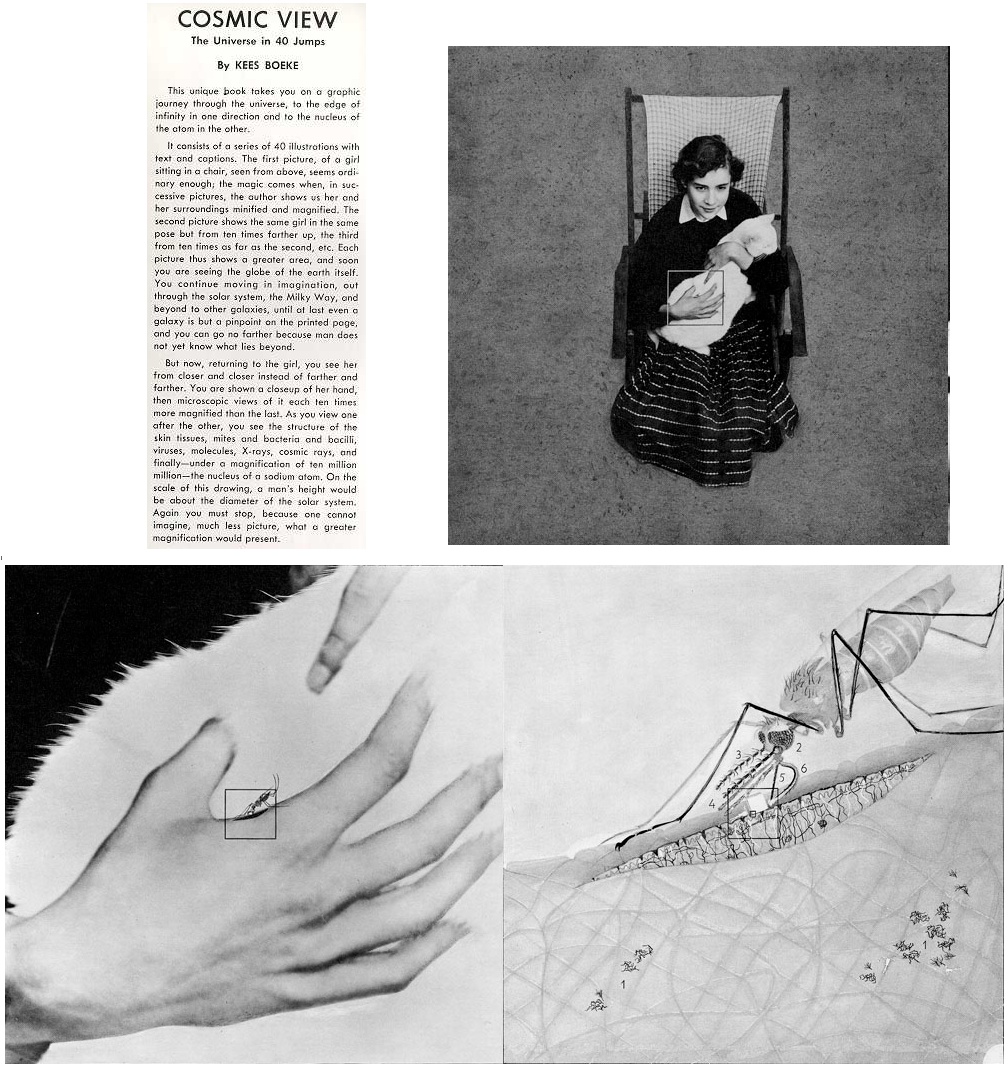 A bacterium on a diatom on an amphipod.