Robert Kaiser, a distinguished reporter and editor at the Washington Post, describes his aortic dissection here.

To see the spiral CT scan animation and still-land drawings of the operation, go to the Interactive Graphic box, "My Telltale Heart." Watch the animation several times, after studying the last frame, to see the dynamics of the dissection. Or, for the images, read the article.

To read the entire article without having to go through all 5 page links, just go to "print this article" which puts all the pages onto one continuous page (and does not cause your computer to print the article).

Now and then, this personal narrative leaves the case-study (n = 1) mode and provides some general context. For example: "Unless repaired, dissections of the ascending aorta kill most of the people who have them, instantly or eventually. The risk of death for those who survive the dissection itself rises sharply as time passes -- about 1 percent per hour for 48 hours." The report also illustrates the great importance of good imaging, which is usually non-invasive, in preparation for the often-invasive treatment. And also the statistical lesson in medical care: always ask how many times the surgeon has done the proposed procedure (in this case 200 times), since, as in so many things, rehearsal improves performance.

By tracing out in detail the months-long events, Kaiser's report is helpful to those facing such difficulties. It also illustrates what optimal care looks like, thereby providing a basis for comparison for less privileged patients.

Finally, in case studies, the question is always "Compared to what?" Robert Kaiser fortunately survived to write this riveting account. If not, no story.

Interesting, well-written story. I was somewhat surprised to read that the emergency medicine chief who evaluated Kaiser had never before encountered an aortic or carotid dissection in his practice. I also question the utility of ultrasound in this setting; CT (or, more specifically, CTA [CT Angiography]), can image the aorta and its branches (including the carotid arteries) in one exam. With state-of-the-art CT equipment, this takes only seconds.

The CT scan shows an enormous number of structures. I found it completely unintelligible when I first saw it, but the exercise of identifying the structures absolutely invaluable. I used Netter's Atlas of Human Anatomy as a guide.

First, you have to realize your looking at this person from the toes up, not the head down. The left heart chambers are on screen right.

As the first segment starts you see a bright region which is the right atrium (screen upper left). It's bright because contrast material has been injected in Robert's left median cubital vein (in the front of the elbow). If you're unfamiliar with this sort of imaging, it's worth running through the scan once just following the contrast material to get your bearings. It's like moving back in time, against the direction blood normally flows. Follow the contrast material out of the right atrium into the superior vena cava, to the left brachiocephalic vein, the subclavian vein, and the axillary vein. It's near the end of the first segment that you also start to see contrast material in the rising axillary vein. In the second segment you see both the vena cava and the axillary vein (now the subclavian vein) rise and in the third segment you see them come together in the brachiocephalic vein. It sounds confusing but it's just one long path that gets a new name every time a new tributary comes in. Back to the first segment.

There are some criss-crossing structures posterior to the heart, first four darker ones (two sets of two) and then a larger, brighter set. You guessed it, the brighter ones may just have some contrast material in them. Those are the pulmonary arteries carrying deoxygenated blood from the right ventricle to the lungs. The earlier (lower) four darker ones are carrying oxygenated blood to the left atrium of the heart and Robert's left ventricle will pump some of that blood into his dissection.

In the first segment you'll also see the large dark wedge on lower screen right. That's his left ventricle. Once you have your bearings you can see the aorta emerge from it and traverse the screen, rising toward the front and center, just behind the sternum. At the end of segment one you see a triangle between the aorta and the sternum. Thats the transverse pericardial sinus. The the base of the triangle is the aorta; the outside of the sinus is the pericardium, a fluid-filled sac that separates the beating heart from everything else.

In the second segment you see the sternum turn to a small bright dot and expand again, broader than it was before. That's actually a seperate bone called the menubrium. The sternum and menubrium come together in a joint that's similar to two continents coming together and pushing up a mountain ridge. You can locate your own menubriosternal ridge about a hand's breadth below the notch at the bottom of your throat.

At the end of the second segment, frame 60, you see the bright curve on screen left? That's his right humerus. Go forward and you'll see the ball and socket joint form. Notice how shallow the dish is? That's why humans are at risk for dislocated shoulders: the humerus can just about slide off the face of the clavicle. You don't hear about many dislocated hips. Although obscured by the scale, you can get a still shot of the left shoulder socket at frame 81.

Did Leonardo da Vinci realise that he might be creating 'forever knowledge'?

Here is a piece on the link between a Renaissance drawing and developments in 21st century cardiac surgery.

What if the surgeon hadn't appreciated the potential significance of the drawing?

About this time last year I heard Dr Michael E. DeBakey, one of the most famous surgeons ever, had developed an aortic aneurysm. Ironically, he developed the surgery to repair this otherwise fatal condition, which is described in the original article of this thread. At the time I was studying with the rest of Tulane's medical school at the Texas Medical Center, which Dr DeBakey built around the Baylor College of Medicine. We were there because Katrina had displaced us, and Dr DeBakey, who graduated from Tulane in 1932 as one of Rudolph Matas's premier students, had arranged for our accomodations. Thanks in part to Dr DeBakey I'm now back in New Orleans, writing this from the Rudolph Matas Library.

I didn't know how Dr DeBakey's situation turned out until recently; I just read about it in Lawrence Altman's New York Times story, The Man on the Table Devised the Surgery. The article shows pictures of him in a wheelchair. Here he is, last year, talking to Tulane students at a youthful 97, 90 days before his aorta dissected. 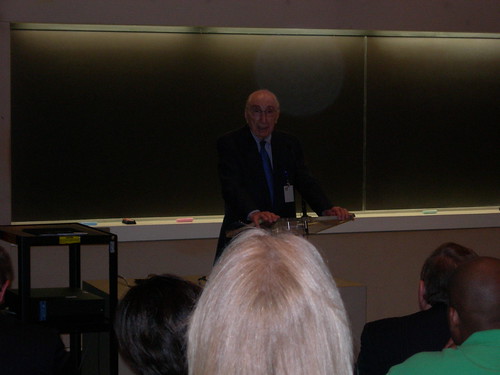 The story mentions Methodist Hospital refused to treat him and that this came as a shock to his heart doctors. To put this in context, the fourth floor operating suite in Methodist Hospital has one coat hook; protected from three layers of paint is a label over that coat hook with one word on it: DeBakey.