Current Topics | All Topics
Click here for more information about ET's course and to register. 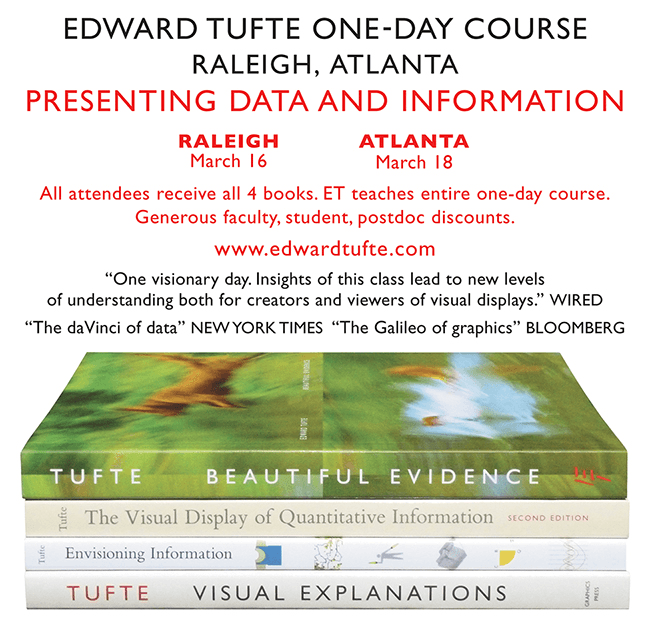 Richard Feynman's famous conclusion to his report on the shuttle Challenger accident, which arose again in the Columbia accident, is "For a successful technology, reality must take precedence over public relations, for Nature cannot be fooled."

Feynman is referring to the laws of Nature.

A short-form version of Feynman's statement is "You can't pitch Nature."

There is a strong parallel to Feynman's "Nature cannot be fooled"
in Galileo's remarkable letter to the Grand Duchess Christina of Tuscany, 1615.
Here's my account from Visual Explanations, page 53:

Feynman's statement is the last sentence of his famous report on the shuttle Challenger accident in 1986. The statement can be parsed as follows:

"For a successful technology"
This is the domain statement, which describes the scope or relevance of the upcoming idea. The domain is techology or, more broadly, engineering and scientific work.

"reality must take precedence over public relations"
This is pointedly addressed to NASA, where the wishful thinking of pitching the safety of the shuttle led to public estimates of LOCV (loss of crew and vehicle) as 1 in 100,000 flights. (That is, the shuttle could perhaps be launched everyday for 300 years without an accident. In fact, today, the empirical LOCV rate is 1 in 57.) There is a strong hint in this clause that pitching out corrupted the risk analysis within.

"for Nature cannot be fooled."
A reference to Newton on the utter indifference of the universal laws of Nature to what humans beings wish or think about those laws. Nature operates in its own inevitable lawlike way, independent of human thoughts. The passive voice here does not directly say who is attempting the fooling; nonetheless, the "public relations" mention in the main clause specifically identifies one possible fooling agent.

Seven members of NASA's Return to Flight Group brought up Feynman's "Nature cannot be fooled" in their review of the work repairing the space shuttles after the 2003 Columbia accident (from Beautiful Evidence, p. 168):

Feynman's words are also included in the epigraphs to my essay/chapter on PowerPoint.

Another famous quote in line with "nature cannot be fooled"

In the student lounge of my undergraduate aerospace department, the walls were covered with ratty old posters of cold-war era aircraft and rockets, the newest jumbo jets, and the latest Mars mission. But despite those striking and impressive images, my favorite poster showed an old airplane lodged in a solitary tree accompanied by a single caption: "Flying is not inherently dangerous, but to an even greater extent than the sea, it is terribly unforgiving of carelessness, incapacity, or neglect." I contend the statement is truer still when applied to spaceflight.

I'd suggest that we start a grassroots movement to mandate that quote be put in the dreaded "take-away" box at the bottom of every NASA chart, but it includes punctuation (no!) and too many words to fit in the allocated space when the minimum 30+ point font size is used.

Or as "Dr. Gregory House" put it: "Symptoms never lie."