After taking these curious pictures, I consulted with a Yale School of Forestry student (which led to looking up "albedo" in Wikipedia), kept repeating Feynman's single greatest truth ("Everything is made from atoms"), and bumped into a key idea in, of all places, The London Review of Books. Here's my report.

First, the optical effect shown here is the valley-or-mountain illusion. All the areas close to the individual pine needles are valleys in the snow.

Second, why the valleys? Snow has a high albedo, reflecting much of the sun's heat back into the air. A white pine (pinus strobus) needle has a low albedo, absorbing the sun's heat and melting the snow to make the local valley. (Perhaps the weight of the pine needle contributes something.) I should put down some bleached-white white pine needles when it snows again, which will probably be next winter.

Fresh snow reflects 70%-85% of the incident light. Forests, savanna, crops, and meadows 5% to 25%. And water only 5% to 8%. So once some snow is turned to water right next to and under a pine needle, then the pine needle and the initially small amount of melted water both contribute to enlarging the valley, which grows to an area much larger than the pine needle itself as the water causes more melting and flows more broadly around the pine needle. This is a positive feedback loop, as change encourages further change in the same direction. Also the resulting cavity of snow may reflect less heat than the flat surface, resulting in more melting and a bigger cavity.

"Another feedback effect is caused by the melting of ice. Ice has a very high albedo--meaning, it reflects a lot of the sun's heat straight back out into space. This in turn has a coolling effect, which cause the manufacture of more ice, and so on. When ice melts, [however], it turns to water, which has a much lower albedo, and therefore absorbs more heat, and therefore causes more ice to melt, which lowers the earth's net albedo even more, which causes it to be warmer, and so on."

Shadows are also involved. The pine needle and its developing cavity cast shadows that result in areas of snow with reduced albedo. These shadowed areas receive indirect sunlight by means of atmospheric scattering.

Can a Kindly Contributor with some physics expertise do this problem set and straighten out my dequantified story here?

Wow, my physics is rusty.

It's probably advisable to start with the static problem.

The energy available to heat any patch of snow over a given time is the energy flux into the snow less the flux out,

The basic form for this scenario would be evaluating flux through a plane near a hot wire that does not intersect the plane. Let the wire lie on the z axis, and orient our frame of reference so the plane is parallel with the z-y plane. Let the vector ȓ (spoken r-hat) be the vector from the wire to some point on the plane, expressed as (r, θ); r being the displacement (measured in units of length) of ȓ and θ being the angle between ȓ and the shortest path between the wire and the plane at any value of z. For any point z on the wire, energy flux through the plane will drop off with 1/(r·tan(θ)). Let us say the wire radiates some amount of energy per unit length per unit time. This would be power per unit length; let us call that P. So, the energy flux into any small patch of the plane is

In addition to a heat source, we have a heat sink, the atmosphere.

My math rendering skills fail me at this point; I leave it to the reader to substitute our specific Fin and Fout into the equation

This is the energy that will be available to melt ice. The rate at which the ice receives sufficient energy to undergo the phase change, about 80,000 calories per solid liter, will determine the shape of the trough. We can already predict that in cross section the trough will have a form resembling, though not congruent with a bell curve. The tangent function suggests the middle will get heat much more quickly, and the concavity will change where

The needles are a bit tricky. It is probably easier to find the absorption spectrum of wood (sort of like the color of toast), but while both wood and needles are made of cellulose cell walls, the needles also have brown pigmented remnants of chlorophylls, not unlike bilirubin. An alternative method would be to collect a several bunches of pine needles and half bury a thermometer in each of them. Cover them with increasing amounts of snow. Plot the change in temperature over time for each bunch, with another thermometer at the surface. Then take a pile of the pine needles to the local high school and get some heat capacity measurements on the needles using a bomb calorimeter.

The CRC Handbook of Chemistry and Physics doesn't offer many experimentally derived values to guide our effort, but Kenneth Libbrecht might be your man. He recently published The Snowflake, Winter's Secret Beauty. It's a happy little book very much in the vein of this thread. The author's bio blurb from the back of the dust jacket:

Kenneth Libbrecht was raised in North Dakota and educated at Caltech and Princeton, receiving his Ph.D. in physics in 1984. He subsequently joined the faculty at Caltech, where he is professor of physics and head of the physics department. Dr. Libbrecht has published numerous articles on a range of scientific topics, including the free oscillations of the sun and stars, ultra-cold atomic gases, the detection of gravitational radiation, and the mechanics of crystal growth. He lives in Pasadena with his wife and two children. The latest news and views of snow-crystal research can be found at his website, www.snowcrystals.net.

His email address is available at the bottom of his homepage.

It may be due to the air currents that form around the needle.

The temperature at the snow surface would always be below zero celcius, the melting point of water, and I doubt if a pine needle would be able to raise its temperature above zero due to solar absorption and cause melting. Ice, the snow, however will sublimate at low temperatures, that is, change directly from solid to gas without passing through the liquid phase. This is usually assisted by air flow. This can take place at very low temperatures. (This is why you can dry clothes on a clothes line even when it is freezing)

With the pine needles, a very gentle breeze will cause the air to curl over the needle and the ice on the downwind side will sublimate at a higher rate. I would hazard a guess and say that these photos were taken after it was very still with only a gentle breeze.

You can see a similar effect in sand dunes. The downwind side of a plant will have a depression in the sand due to air currents.

Interesting. It was in fact quite windy during the days before the pictures were taken.

There are two other similar pictures of the pine needle cavities that I'll have posted shortly.

By the way, the Macnify widget has been very helpful in enlarging each needle- cavity way up to get a good look. I highly recommend Macnify, a free widget for OS X.

MacNify appears to be standard issue in OS X Tiger, except I use the - and + keys instead of the scroll wheel.

I suspect all the postulated mechanisms are at play to one extent or another. The fluid dynamics of dune formation is something I have not contemplated in any rigorous fashion, ever. I suppose it would have to start with Bernoulli's equation. Cavitation is probably not the most significant phase change in this situation, though there may be a role for sublimation.

Do you still have any of the needles for providing a sense of scale, or maybe any other photo out of the series above with a reference, footstep or something else?

My educated guess is heat transfer from the pine needles to the snow creates a sharp, steep cavity just larger than the pine needles themselves; the processes of evaporation and sublimation (how much of our snow loss occurs) continue to deepen and broaden the cavities by acting on all faces of the original narrow depression. The broad cavities observed in the photos are the result of this secondary "erosion", not direct heat transfer alone.


Here are the two other pictures of pine needles in the snow.

On a late winter walk my seven-year-old son spotted the first leaf below with an excited cry and took the picture. We later saw the same phenomenon with several other leaves and twigs which prompted a discussion of possible mechanisms. Our speculations ranged over albedo-like concepts, though we didn't know the name then.

Below, a report from the staff at the Graphics Press Test Laboratories (whose previous field research on salmon and flamingo color set a new standard), the long awaited pine needle measurements, including the amazing discovery that pine needles are triangular in cross-section. The staff writes (and photographs):


Eastern white pine (Pinus strobus) needles are generally 3 to 5 inches in length, or about the same length as a computer mouse. Needles have a triangular cross section, approximately 0.025 inches to a side. (Camera was at slight angle in picture.) Exact needle dimensions can vary by individual tree, position of a given needle on the tree, and the quality of the tree's site conditions.

I suggest an experiment: put down a set of different coloured cards (different albedos) onto the snow and measure their rate of descent into the snow. Make the cards different shapes (long and thin like a pine needle, or circular), but alter their size so that all the cards apply the same pressure onto the snow underneath it (pressure being the ratio of the card's force, or weight, to its area). Try another set of cards with the same colour but different levels of gloss. Try a transparent cards, or cards made from metal foil. Try predicting the outcome based of different theories and see if the results match.

Perhaps an additional positive-feedback mechanism is at work here: The shape of the valley of the reflective snow may direct the incident light to the pine needle, similar the focal point of a parabola. This way the light that the needle absorbs is not limited by its surface area; it may also absorb some of the light that falls on the surrounding valley.

There is at least one more factor contributing in this process. Snow containes small impurities. As the snow melt these impurities stays on top, creating a darker surface and less reflection in the area where the melting has taken place.

Sometimes nature also gives us a beautiful reverse effect, caused by drop in temperature and increased wind. The more icy imprints of the needles (or other object) will not erode as fast as the unblemished snow, turning negative into positive. But that is probably for another thread ...

We performed a simple experiment to see what effect pine needles had on fresh snow albedo. We added needles in groups of 50 and measured the albedo with solar sensors. You can see some graphs here: http://geode.colorado.edu/~s mall/foresthydro.html#albedo 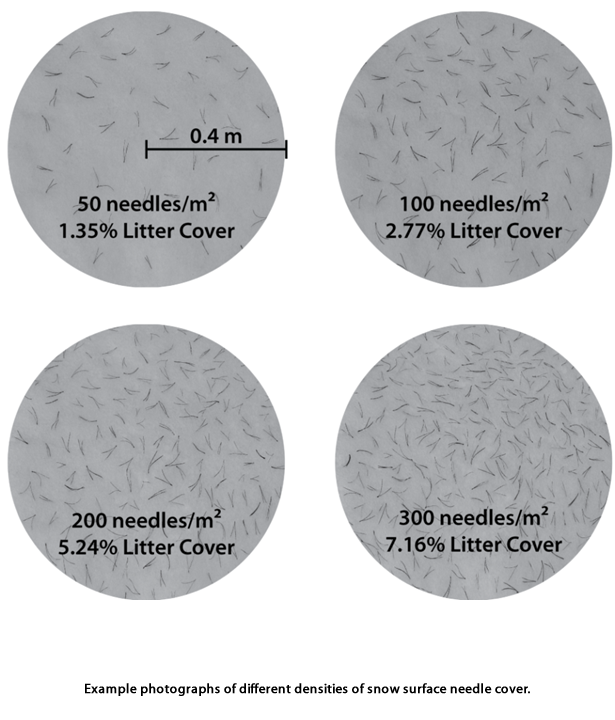 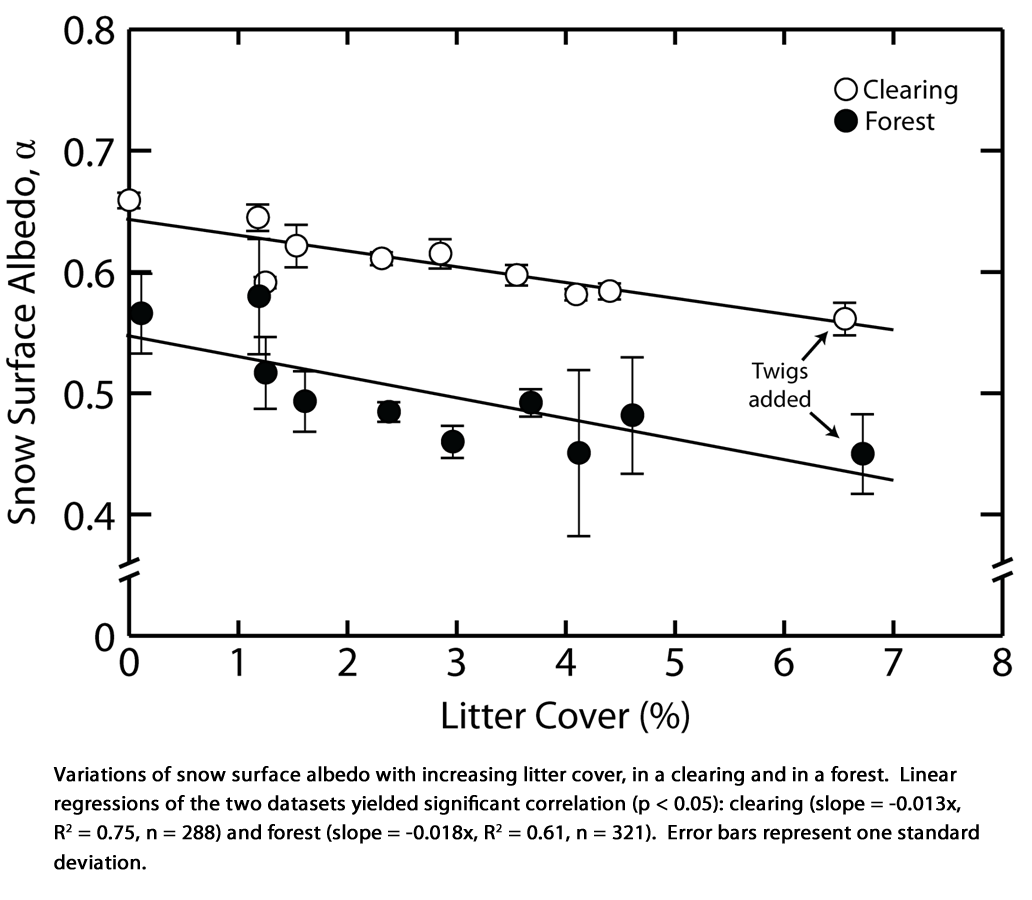