Quicktime movies (that link photgraphic stills) showing the piece above. The slow version is probably better.

Slow To vary the rotation speeds within each sequence, use the arrow keys.

[Our first real video is available further down this thread, in the contribution of April 13, 2007.]

Below, the same piece as above. On the left, an optically-active ground surface;
at right, a neutralized ground surface. The active surface deflates the negative space--
the volumes of air--compared to the sculpture with the more neutral finish.
A key element in the generating the 3D negative space is the edge formed at the intersection
of the 2 vertical elements; that intersection nearly disappears with the active surface.

Flatland photographs (and even videos for that matter) provide an incomplete view of
sculptural negative space; you have to be there and be moving in real-land to experience
the subtle air volumes.

Another new stainless steel piece below, again an investigation of the
negative space caught up within the 4 adjoining elements (baseplate + 3 elements above).

[This piece is featured in the video premiere of April 13 posted below.]

From my book Envisioning Information, here's the conclusion to a chapter on 2D flatland:
layering and separation, figure and ground, positive and negative space.

The 2D ideas go on over to 3D real-land (spaceland, or what about space/time land?),
with complications and elaborations forthcoming.

After 4 afternoons of figuring out how our new video camera works, today we
went outside and made videos of a rotating piece and, in particular, the moving-shadow
flatland projections. The idea then is to use those shadows to produce interesting flat
metal elements (and the resulting drops) to be gathered together in future sculptures.
Also the moving shadows under the moving 3D piece are beautiful.

In addition, I shot some sequential high- resolution stills.

Tomorrow we're going to start to understand Final Cut Pro in order to edit videos;
the quick-start manual, however, is 120 pages long.

Below, stills taken during our video experiments yesterday.
The idea is to study the cast shadows from the 3D piece, which is now an image generator.

The play is between the spaceland stainless piece and its shadows projections onto flatland.

Immediately below is a short video about a 3D sculpture and its flatland shadow projections.A medium-resolution video (6 megs)

Below, here are two photographic studies that link together several still frames.

I thoroughly enjoyed todays workshop in DC. We met early in the morning session and I was the guy that was both working in web analytics and a part-time sculpture (your forgiven if you don't remember - there were many people there).

Following our brief conversation I thought that you might like to see your influence at work. I created a concept map of 20th century sculpture and the influence of history and art movements upon it for a class when doing my masters degree back in 2000. You will find this here:

I managed to get a high distinction for the work and I have followed your principles since. Naturally there is always room for improvement!

Web analytics is a favourite topic of mine and in particular the muddied thinking in this area. I will certainly review the website and contribute to the debate where I am able. My company's website is www.panalysis.com and I write semi-regular articles on web analytics there.

Once again, thank you for your workshop. It very nicely coincided with the EMetrics conference. Whilst I have been a big fan for around 10 years, I haven't been able to attend one previously as travelling all the way from Australia for a 1 day seminar would be impractical.

Let me know if you ever make it to Australia, dinner is on me if you do.

I genuinely don't know where this should go - but these images are sculptural so here goes.

The photographer John Hallmen has a superb set of images of insects taken with a very high magnification macro photography set up. He has a full set on Flickr and his own site = http://www.morfa.se/flogr/index.php. One of his specialities is to compose extended focus images that are created by merging a registered stack of 30 or more 2D images into a single image that lookes like it has a very deep focal volume - a sort of 'Macro-Confocal' imaging.

Below is a lo-res image of one of his stacks of a compound eye.

Space is the Machine

About 10 years ago I did quite a bit of reading on the impact that spatial layouts of laboratories had on the way human beings carried out innovations in those spaces. By far the most interesting work I found was that of Alan Penn and co-workers in the Space Syntax lab in University College London (UCL). This academic-practice group has become a fully functioning architectural practice = http://www.spacesyntax.com/. They combine architectural creativity with rigorous analytical tools for analysing existing and proposed layouts at the level of rooms, floors,complete buildings and also housing estates and even whole cities.

One of the key books in this field that I bought and enjoyed was "Space is the Machine" written by Bill Hillier also of UCL. The whole of this book is now available for downloading(http://eprints.ucl.ac.uk/3881/).

Below is a two page spread from the book. I personally found the use of sans-serif fonts all the way through a bit tiring but the content and integration of the very specific graphical analytical methods with the text is a key feature of the book.

I have included this post here because it deals explicitly with negative space studies - specifically the phrase 'Space is the machine' arose in the following manner, as reported in the beginning of the book.

`But I thought that all that functional stuff had been refuted. Buildings aren't machines.' Student.

`You haven't understood. The building isn't the machine. Space is the machine.' Nick Dalton, Computer Programmer at University College London (1994). 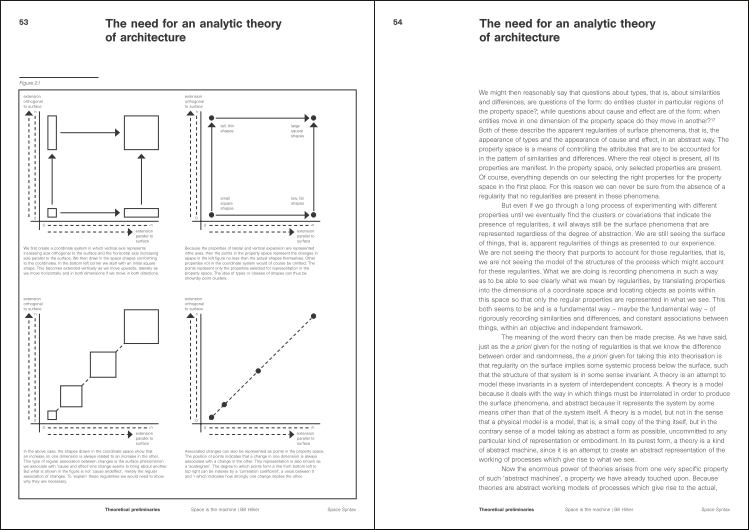 In a sense the following is a good example of a Negative space study.

A Book from the Sky (1987-1991) is the common name of an installation made by the Chinese artist Xu Bing. The installation consisted of hand-printed books and scrolls printed from blocks inscribed with 'false' Chinese characters.

The installation was at the China Art Gallery, Beijing, China.

The installation took Xu Bing over four years to complete, A Book from The Sky is comprised of printed volumes and scrolls containing four thousand 'false' Chinese characters invented by the artist and then painstakingly hand-cut onto wooden printing blocks.

Below is one of the blocks carved by Xu Bing for this project. By definition wood block carving is a study in negative space - it is the space that is NOT removed that delivers the ink (and in this case the whole installation generates a negative space of characters that do not really exist as characters). 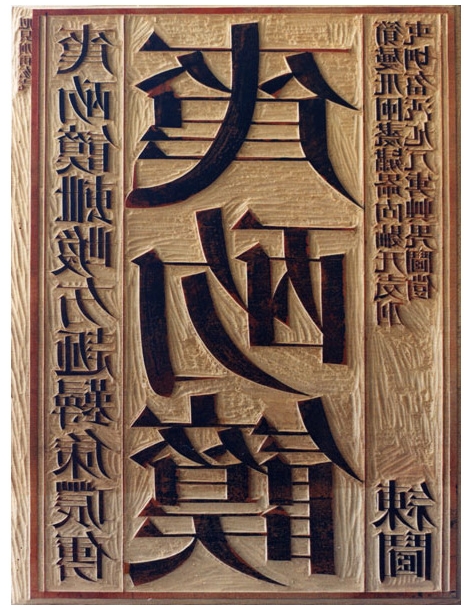