My work revolves around the routinely spectacular resolution of the human eye-brain system, and, in turn, that our displays of evidence should be worthy of the routine functioning human eye-brain system. This is, for example, the conclusion of sparkline analysis in Beautiful Evidence, where the idea is to make our data graphics at least operate at the resolution of good typography (say 2400 dpi).

Below is a link to an article in Current Biology (July 2006) by Judith McLean and Michael A. Freed, from the University of Pennsylvania School of Medicine, and Ronen Segev and Michael J. Berry III, from Princeton University. The research suggests that the human retina transmits data to the brain at the rate of 10 million bits per second, which is close to an Ethernet connection! See Kristin Koch, Judith McLean, Ronen Segev, Michael A. Freed, Michael J. Berry, Vijay Balasubramanian, Peter Sterling, "How Much the Eye Tells the Brain," Current Biology 16 (July 25, 2006), 1428-1434. PDF file here

Looking around the world is easier than analyzing evidence displays, and there may also be within-brain impediments to handling vast amounts of abstract data, but at least the narrow-band choke point for information resolution should not be the display itself.

The average PP slide contains 40 words, which take less 10 seconds to read. Call that 1000 bits per second, which comes to 1/10,000 of the routine human retina-brain data capacity.

Memory problems can be partly handled by high-resolution displays, so that key comparisons are made adjacent in space within the common eyespan. Spatial adjacency greatly reduces the memory problems associated with making comparisons of small amounts of information stacked in time.

I buy increased frame rates for better motion perception -- cinema film projectors actually strobe at 48 frames per second to avoid flicker, but they just show each frame twice. You can see this as a "doubling up" of features when there is a slow pan (particularly obvious in space operas where there is a pan over a star field.)

However, Cameron posits a perceptual tradeoff between spatial and temporal resolution that is not supported by the psychological evidence. Performance at spatial judgement of moving objects does not increase past about 30 fps, and can actually get worse at higher frame rates depending on the type of stimulus. See, for instance, the classic paper by Fahle and Poggio (particularly Figure 4):

I'd like to draw attention here to the book The Organic Codes by Marcello Barbieri (Cambridge University Press). Although much of it is likely to be of interest only to theoretical biologists, there is a section that is quite well related to this discussion.

Barbieri discusses how much information is needed to reconstruct a complete structure from projections of it at different angles. This can be calculated theoretically, but what he showed experimentally, around 1980 if I remember correctly, is that in reality an almost perfect image can be computed from around 10% of the information calculated to be necessary. He is talking here about what a computer can do, but obviously the same applies to the way in which the human brain (or an animal brain) can fill in a tremendous amount of detail from information that appears to be grossly incomplete. He was not talking in this context about human language or universal grammar, but the parallel is by no means lost on him, and indeed Noam Chomsky is quoted on the back of the book saying how fascinating he found Barbieri's thesis to be.

I should add that I don't exactly understand how the calculations are done, but one can see from the results reprinted in the book that they do work.

Dr Harold Edgerton was a remarkable MIT professor. He used stroboscopes to make incredible high speed photographs, which even today are breathtaking. The full range of techniques he invented are all in some way capable of providing new resolving power, often in time.

His motto was brilliant;

Work hard. Tell everyone everything you know. Close a deal with a handshake. Have fun!

MIT are in the process of putting their Edgerton archive into digital form it has numerous images, stories, Edgerton's lab notebooks and biographical material.

The image below is an Edgerton classic Queen of Hearts playing card hit by a .30 calibre bullet, 1970 ?? Harold & Esther Edgerton Foundation, 2002. From Victoria & Albert Museum. 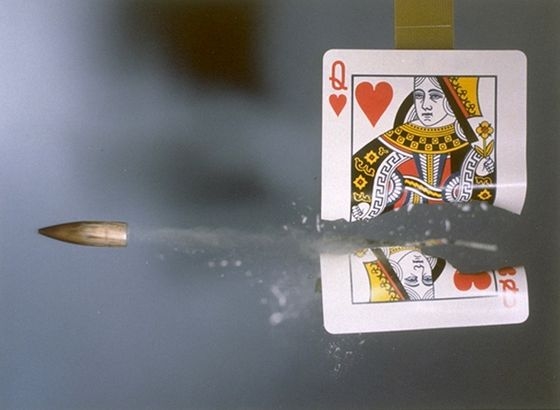