ET's stainless steel Feynman Diagrams are installed at the new World Trade Center building, Fermilabs, Hogpen Hill Farms, and in many private collections. A current exhibition is at the Williamson Gallery, ArtCenter College for Design. Planning in underway for an exhibit at the Nobel Museum in Stockholm honoring Richard Feynman's 100th birthday.

In the stainless steel artwork, the 32 visually delightful diagrams cast changing
shadows on the wall mounting. These new diagrams supplement the Fermilab
exhibit The Cognitive Art of Feynman Diagrams, which will close on June 26.

The artwork was designed and constructed by Edward Tufte, Andy Conklin,
and Brad MacDougall. Thanks to Chris Quigg for pointing out PRL paper.

Here is the 20-page catalog for the Fermilab exhibit:


Fermilab has a most interesting architecture. Here are some of the buildings and
Fermilab sculpture. Photographs below taken late January 2014: 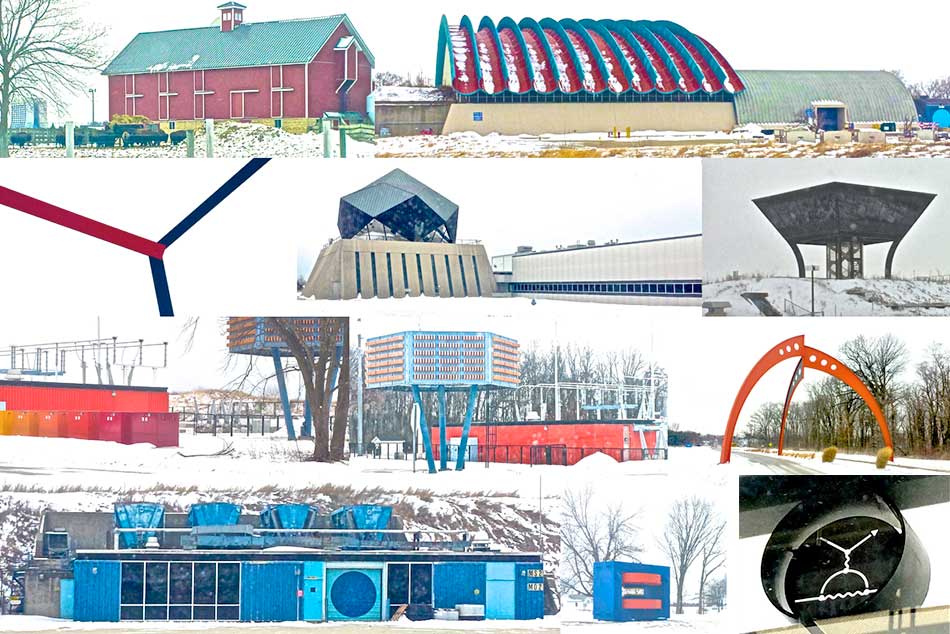 My exhibit at Fermilab makes me very happy: will also teach a short
course on scientific visualization for the staff, and meet people
who actually know how Feynman diagrams work!

Fermilab have some Feynman diagrams cut out of steel as part
of a walkway. Below an ImageQuilt from our Chrome app ImageQuilts 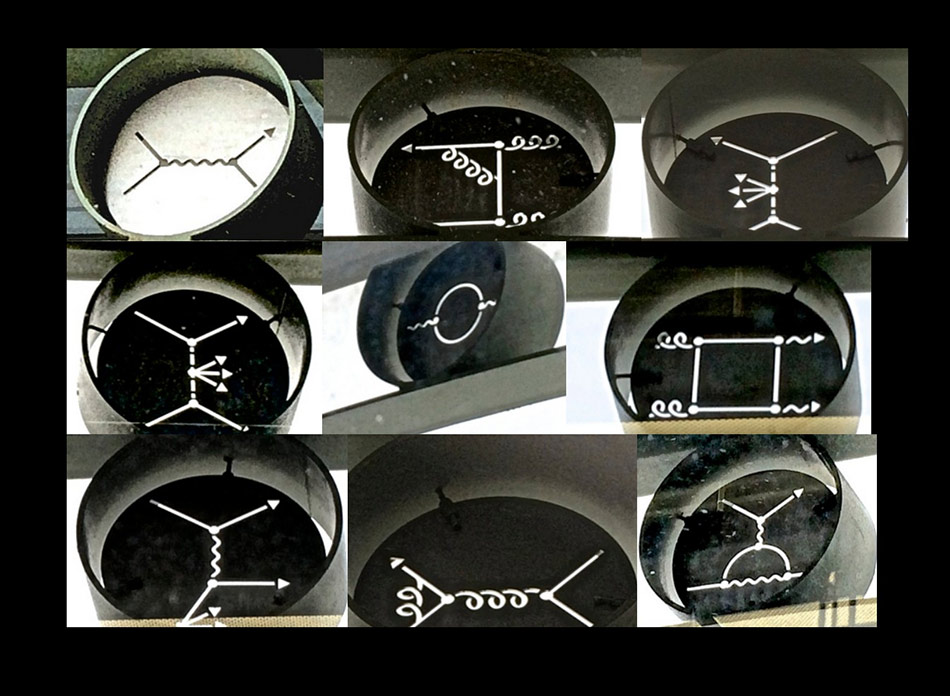 Below, here is the 16-page exhibit catalog (PDF), with a paper edition for the exhibit at ET Modern. 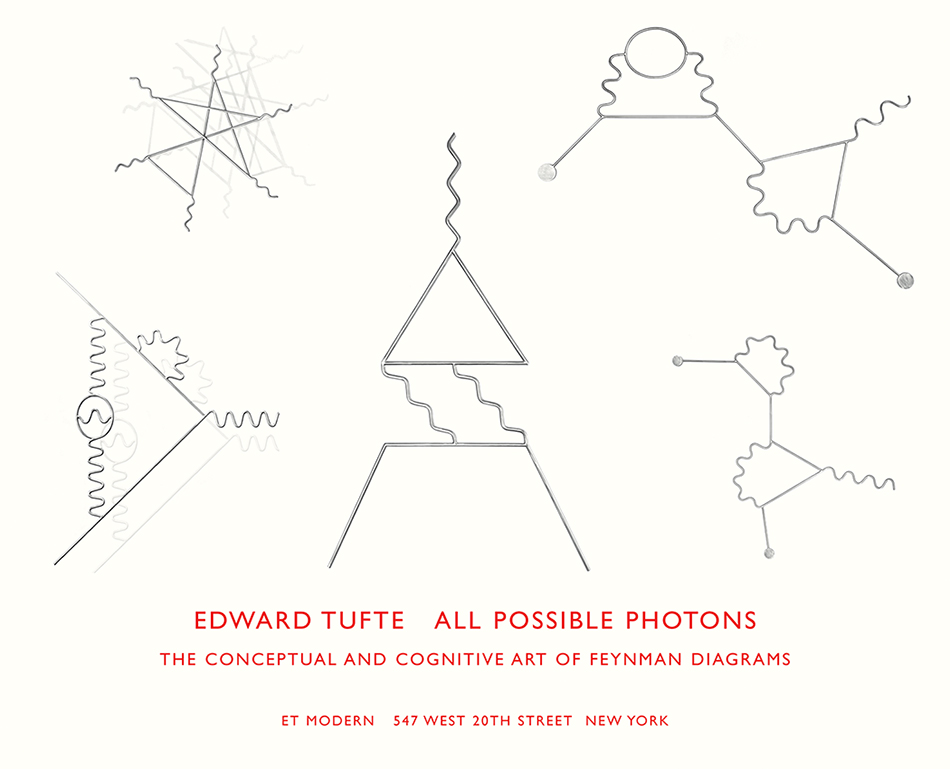 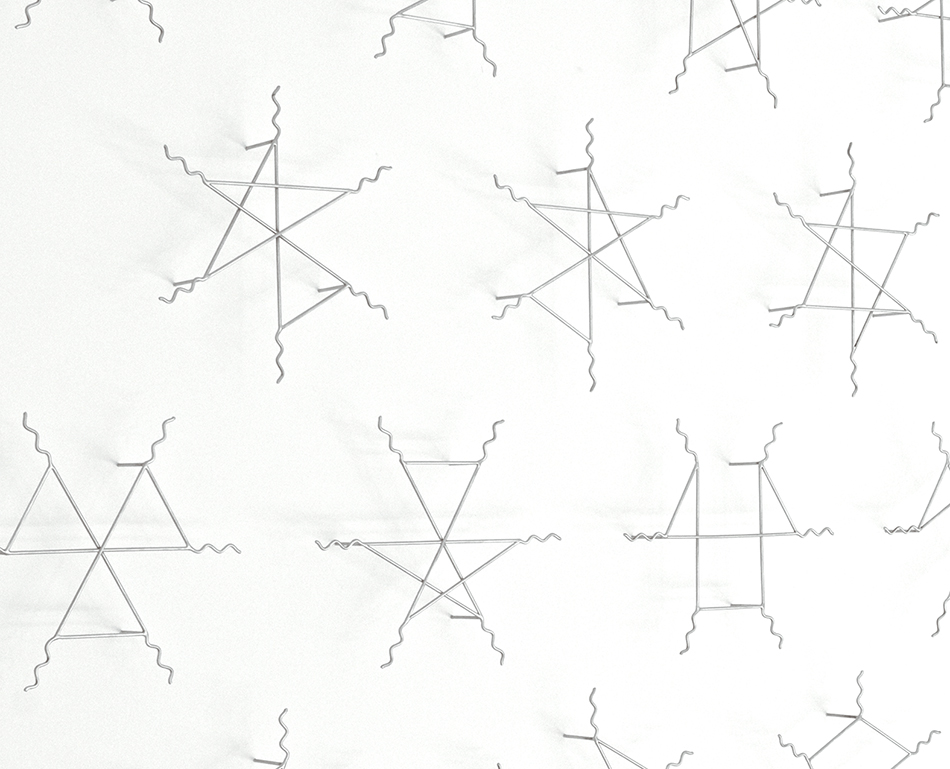 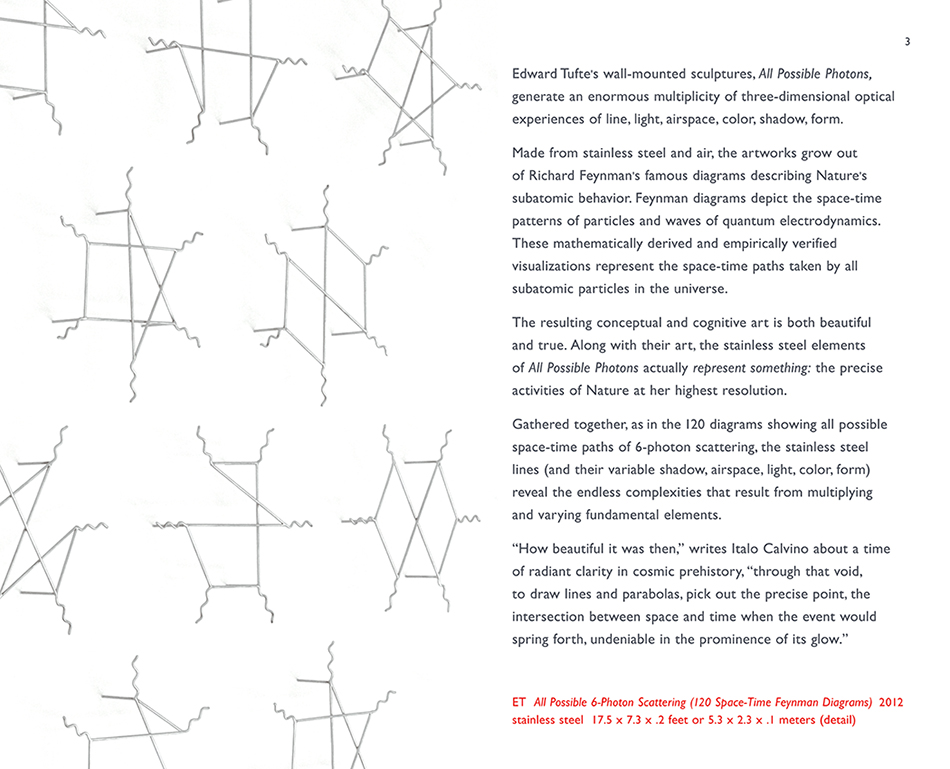 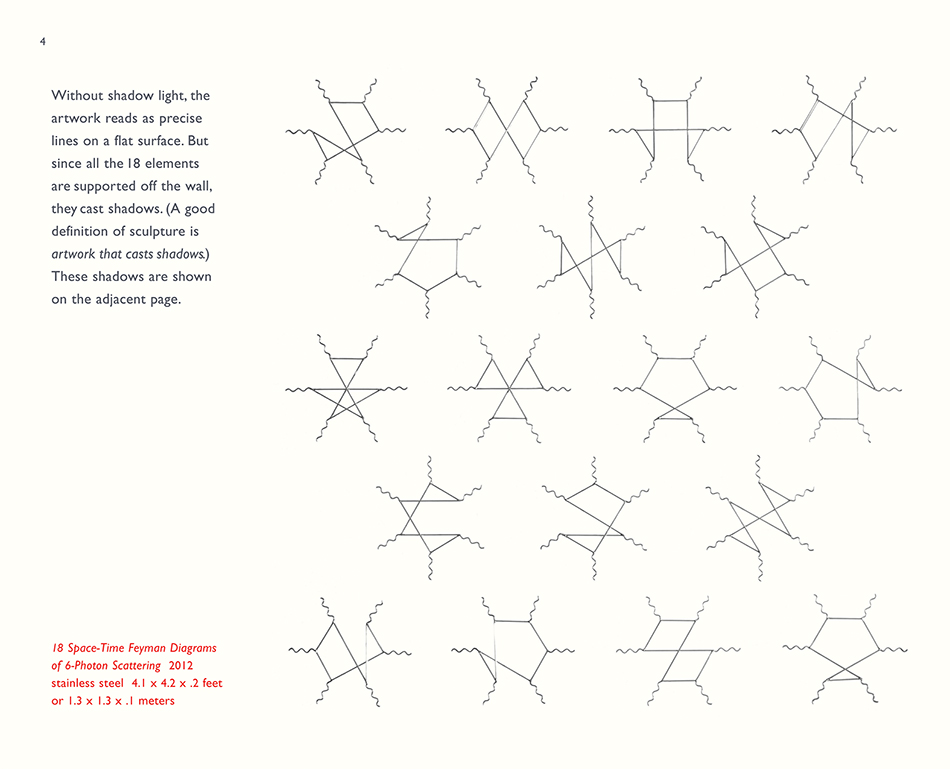 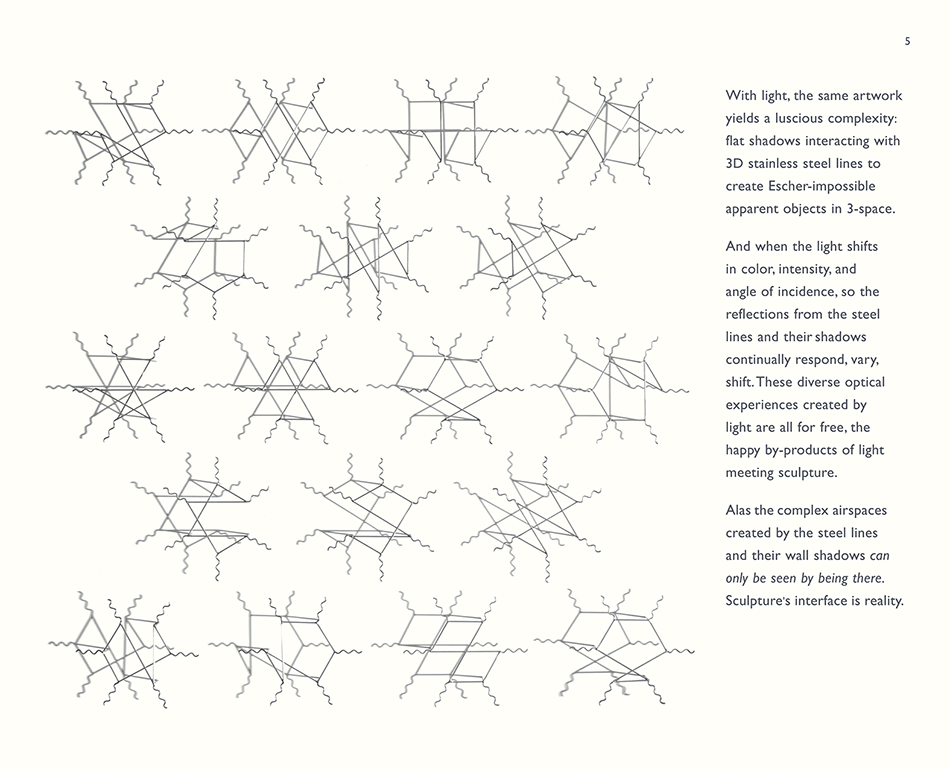 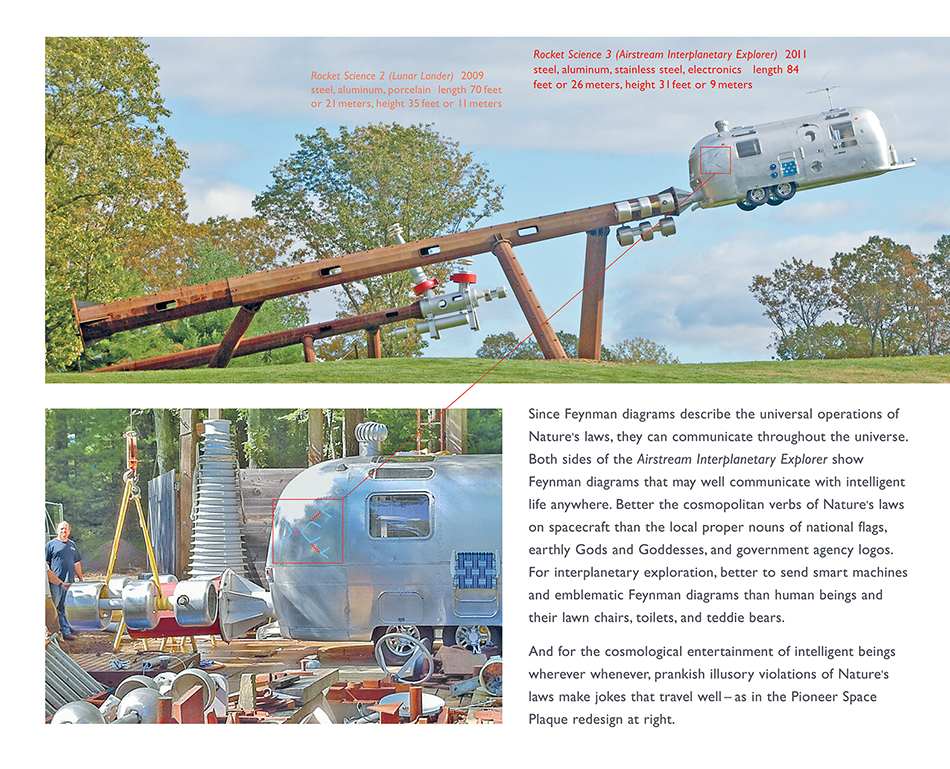 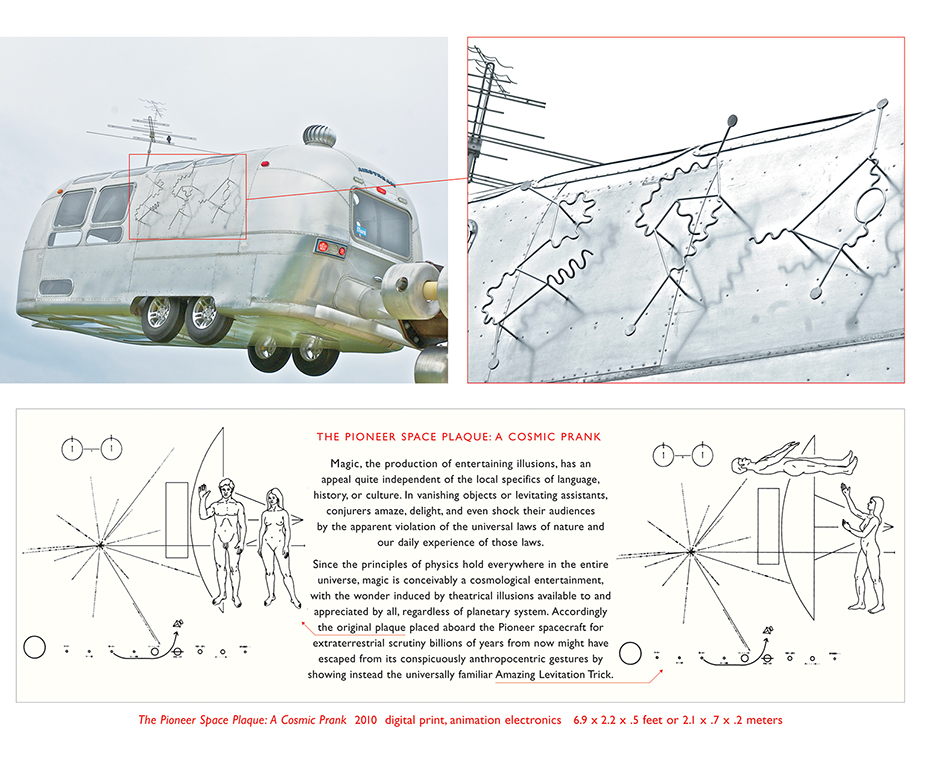 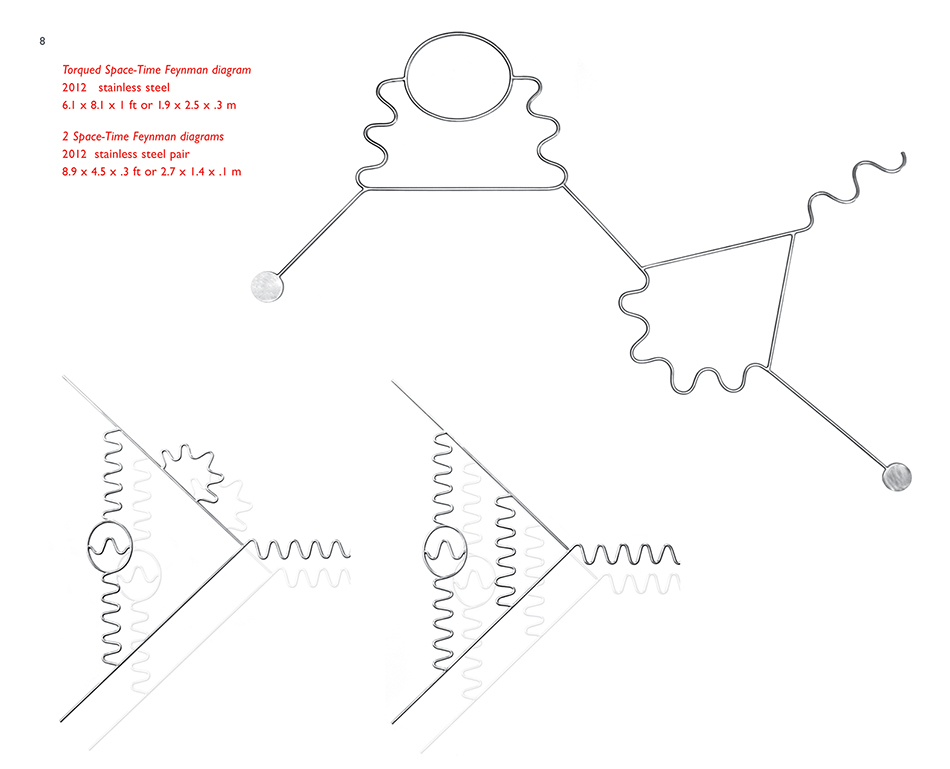 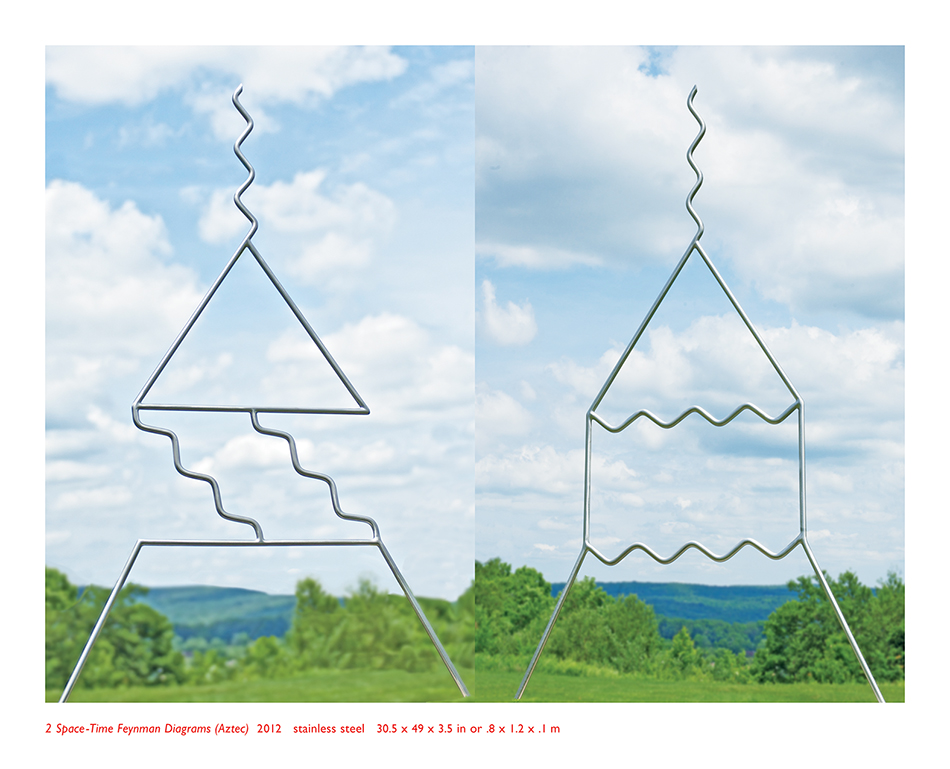 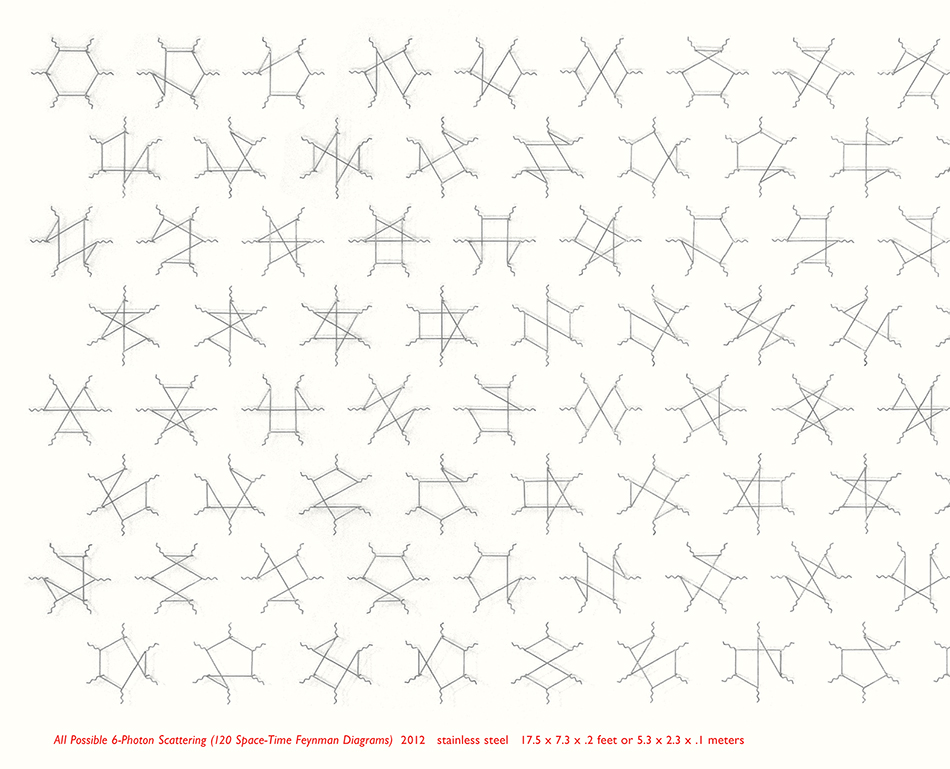 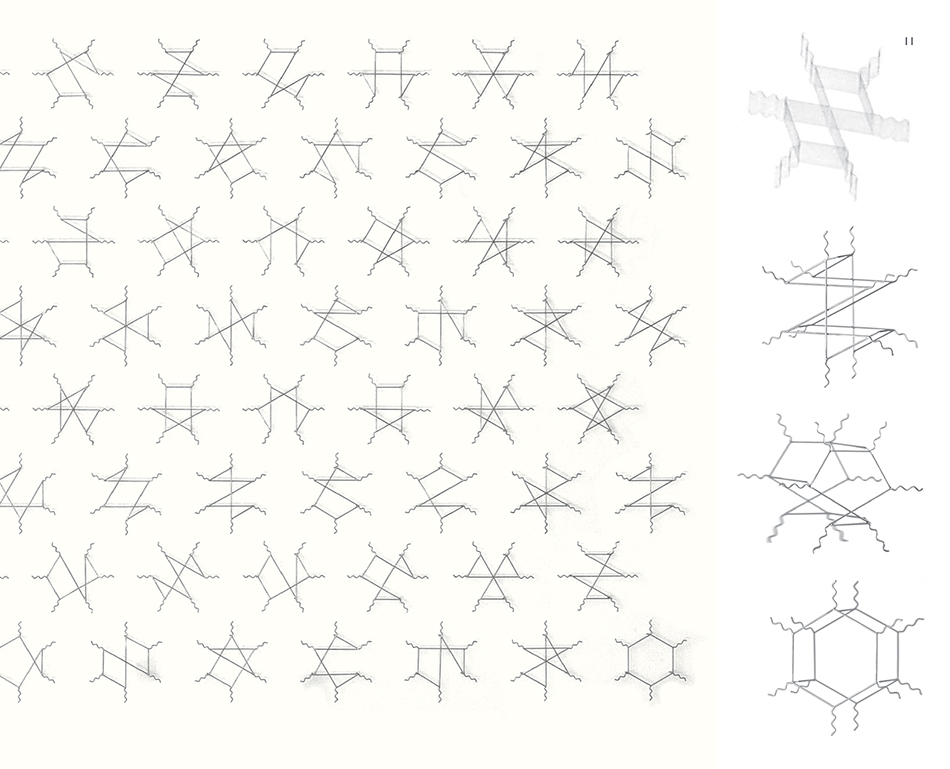 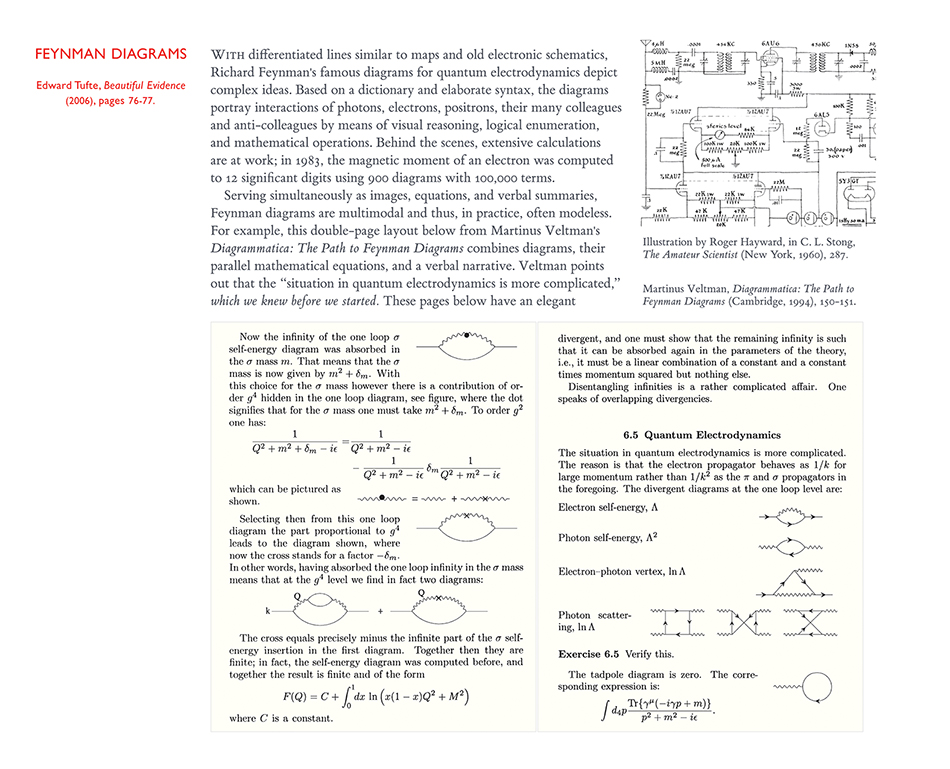 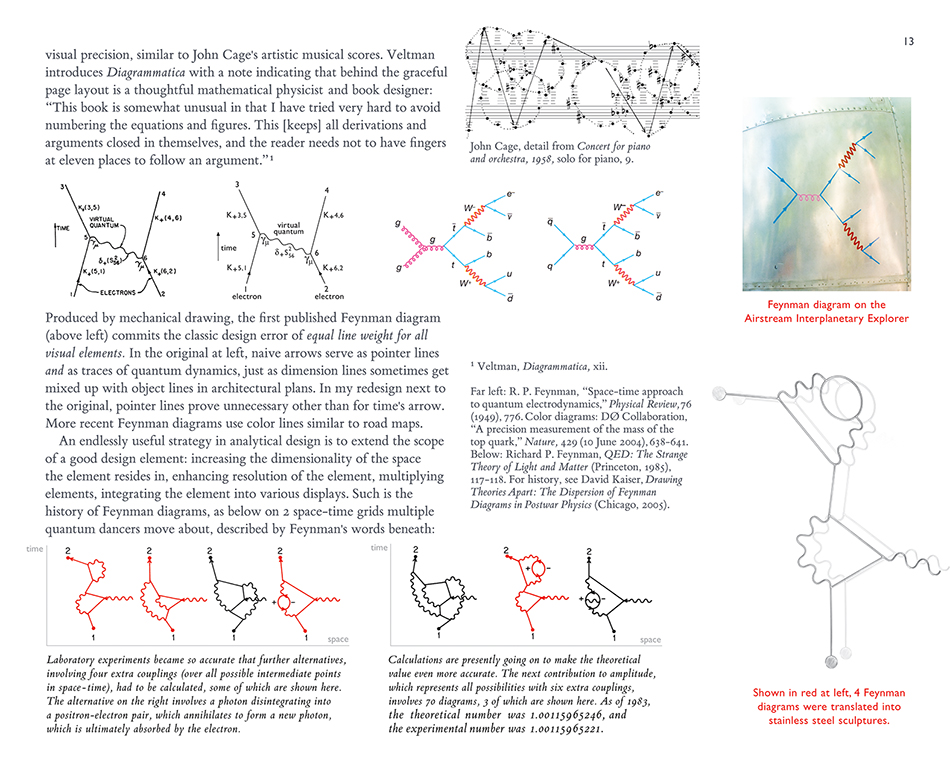 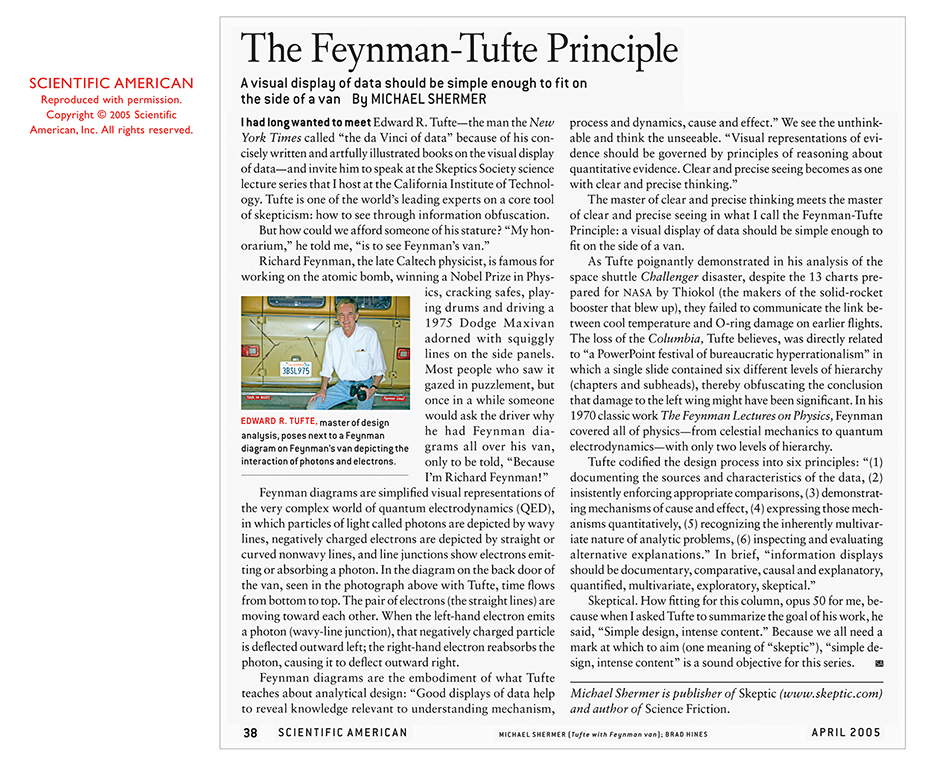 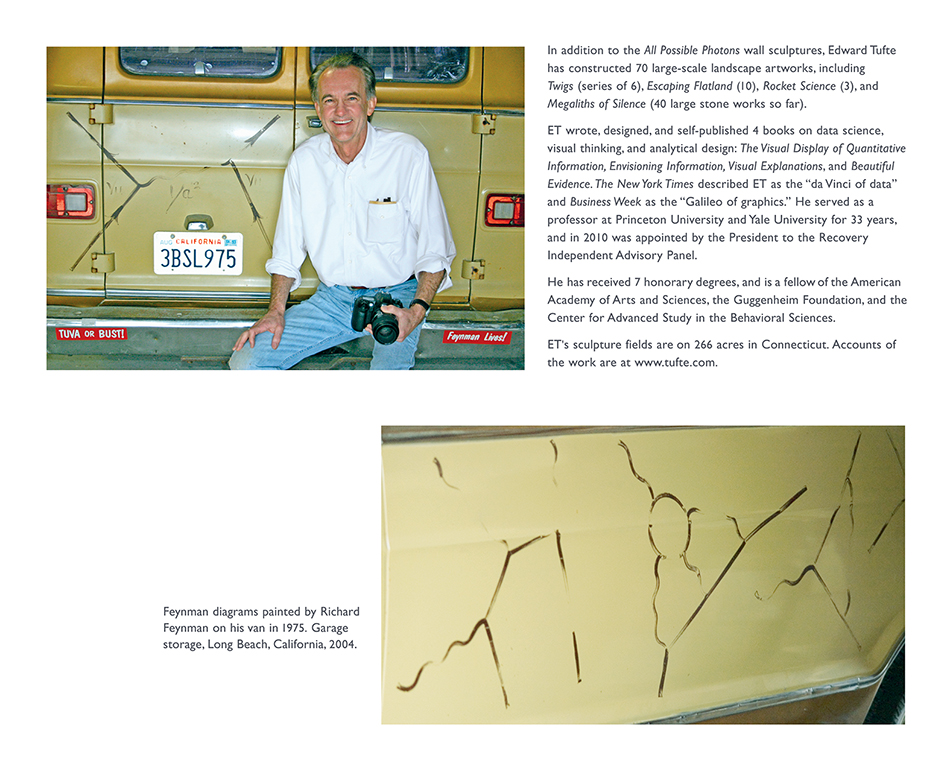 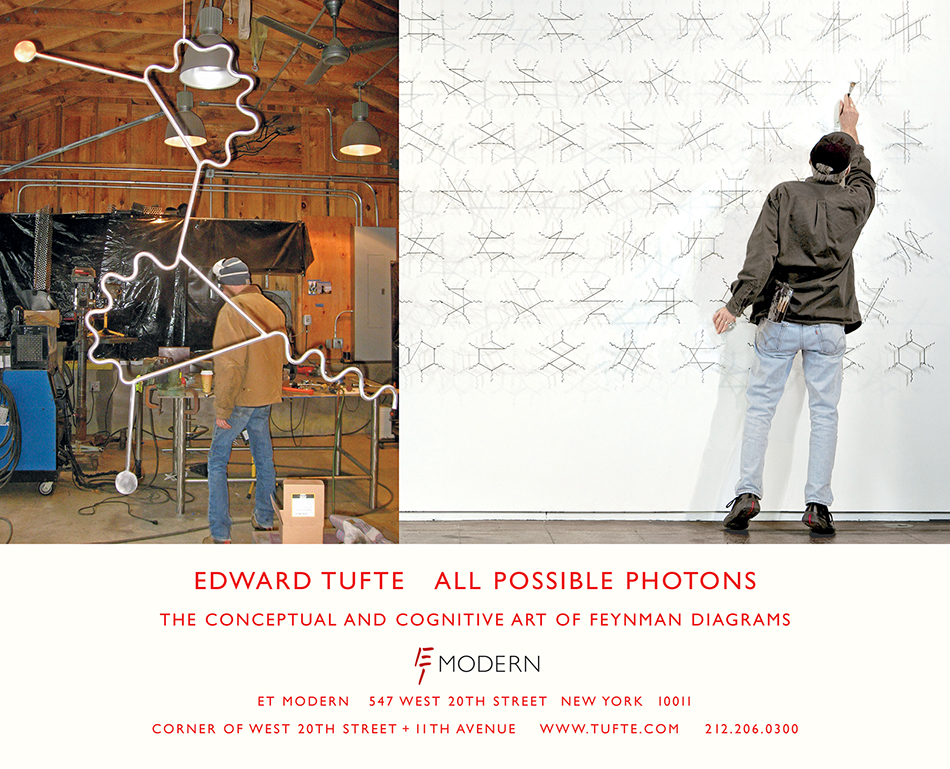 This thread below served during the last 18 months as an on-going rough draft
of the exhibit essay now published as a pdf (above) and also in paper.

Now back to the original thread that began August 2011:


My studio colleagues Andy Conklin and Brad McDougall bent and welded the
stainless steel based on my templates and consequent editing of the steel.

Our stainless Feynman diagrams are mounted on an Airstream trailer,
a reference to Richard Feynman's 1975 Dodge Maxivan which he customized
with a diagrammatic mural. Below are pictures of my 2004 visit to Feynman's van,
then garaged in Long Beach, California. (An account of that visit is in Michael
Shermer's Scientific American article "The Feynman-Tufte Principle".)

Since the Feynman diagrams describe universal events in Nature,
intelligent extra-terrestrial life may well know all about them.
On this point, see the Pioneer Space Plaque Redesign.


I wrote about (and gently redesigned) Feynman diagrams
in Beautiful Evidence, pages 76-77 shown below.


These pages also provide explanations of the diagrams
used on the Airstream Interplanetary Explorer.

Greg Mahlon's example below shows a small multiple of the 120
possible event-sequences for 6-photon scattering by means of
Bill Dimm's helpful computer program at FeynDiagram.com

Jumping Jack Scatter A rapid, stacatto finger twiddling of the Mahlon sequence via the mouse dial - up/down up/down...up/down - manipulates the sequence is a hypnotic, dot-dash pattern that animates the diagram fom static to slo-mo to frantic...very cool, Ned


On the right, a third diagram made with
thinner stainless steel rod.

"Only the best thing ever." Maria Popova, Brainpickings

"A gleaming depiction of the subatomic by the world's leading information designer." Nature