Current Topics | All Topics
Tweet
Maps moving in time: a standard of excellence for data displays

Make the Swiss mountain maps a comparison set for high-end information displays by means
of this pairwise adjacent comparison:


the mountain map side-by-side against the current or proposed visualization.

For example, compare the Swiss map against what contractor provides,
or write comparison set into the contract. (Claiming your users are stupid is not
a good reason for failure to deploy the Swiss map standard and comparison tests.) 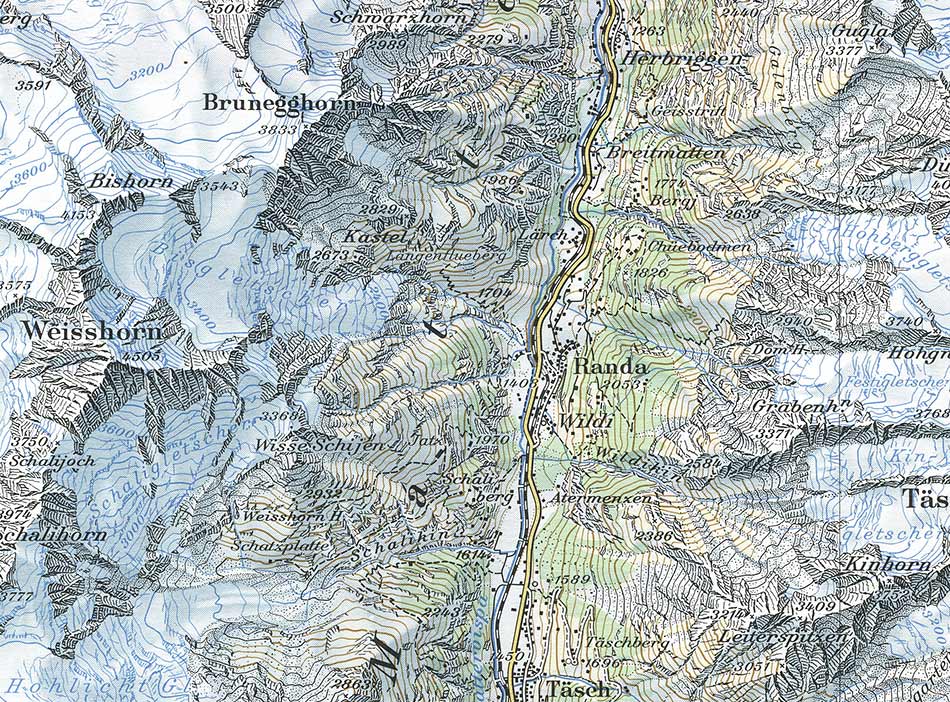 But the Swiss mountain maps - and many other data visualizations - can be extended by moving in time
and eventually on 4K or 8K displays. In our video below, note how panning over the Swiss mountain maps
creates a 3D-reading of the mountains, along with some lovely accidentally-separated-slightly-floating type
and a spectacular elevated effect for what may be a ski-lift.

These effects resulting from slow panning repay study:
gentle 3D readings (without contraptionary apparatus) as well as
subtle separations of type/data from other design elements
(without using annoying flashboxes or popups for type/data).
An excerpt from our documentary film Inge Druckrey: Teaching to See: )

"This incredible map was made in 2008 by Dr. Karl Rege of the Zurich School of Applied Sciences. Using arrival and departure data from the website FlightStats, he and his team simulated the flight path of every commercial flight over a 24 hour period and plotted them all in the map as tiny yellow dots." source

Here is a brilliant map moving through time, one of the best data visualizations around,
Stephen Malinowski's music-animation-machine version of Stravinsky's Rite of Spring.
Full video.

Extremely complex multivariate interacting waves can be shown by means of my wavefield architectures,
more maps moving in time. I have only what the data surface should look like.
All that needs to be done is to hook the surface to data sources other than Nature in action!

Now, what are good design comparison sets for workaday diagrams and data displays?
Well, put your display pairwise adjacent to the most widely used data-architecture in history: Google maps.
Google Maps are used by millions of people everyday to actually do something:
navigate through the real world. That's the best user test: success in the wild.
Now in the pairwise comparison of Google maps with the proposed diagram, ask:
Does my diagram or data graphic compare with the Google maps data practices:

And Google Maps doesn't put some damn drop-shadow box
around every street name. Play in the big leagues.

Response to Standards of excellence for data visualization: comparison sets

Given the prominence you rightly give to the Swiss maps, perhaps readers will want to check out the re-published classic by Edward Imhof, Cartographic Relief Presentation, which is available to buy from ESRI Press.

Within the discipline of cartography, few works are considered classics in the sense of retaining their interest, relevance, and inspiration with the passage of time. One such work is Eduard Imhof's masterpiece on relief representation. Originally published in German in 1965, Cartographic Relief Presentation provides guidelines for properly rendering terrain in maps of all types and scales. This book is an example of the art of combining cartography with intellect and graphics when solving map design problems. The range, detail, and scientific artistry of Imhof's solutions are presented in an instructional context that puts this work in a class by itself, with universal significance. Esri Press has reissued Imhof's masterpiece as an affordable volume for mapping professionals, scholars, scientists, students, and anyone interested in cartography.

Below is a plate that shows Imhof's skills applied. The top two images are a stereo pair aerial photograph. The bottom two are Imhof's illustrations, showing at left a contour plot and at right a combined contour and shaded representation.

With the long-list of highlights of the Swiss maps in mind, look at the transition between the raw data sets (stereo pair images), the "rigorously metrical abstract representation" on the bottom left, which is very difficult to understand and the beautiful image at bottom right which retains the metrical information and some of the textures from the aerial photographs.

Here are three more examples of maps moving in time:

Professor Rory Wilson gives examples of maps showing animal movements in time and space. He highlights the need for high time resolutions snapshots in order to bring out meaning from the movement. In addition he brings the local details (animal movements) into a larger context (changes to / description of an ecosystem).

Giving not only static course map for a triathlon race this example will "run" the course showing you when and where to turn during your race. [Press the "play" arrow to right of GPX for either the Sprint distance or Olympic distance bike course]. One improvement is that the elevation sparkline could be tracked along with the time-elaspsed position along the course to show the elevation at any specific point.

The National Weather Service provides not only the current (static) radar image but will also play a one hour loop showing the movement of a storm helping one to assess whether a storm is moving towards or away from you.

For interested readers, the Swiss National maps that ET talks of are available to buy and download from the Federal Office of Topography (https://www.swisstopo.admin.ch/internet/swisstopo/en/home.html).

Here's a NASA time lapse of a solar coronal mass ejection that adds a lot of depth in the course of slowly panning over the images of the sun.

Wonderful imaging and good use of panning to depict immense 3-dimensional activity.
But video is way over-produced: annoying boing-boing space-music (evoking howls
at computer screen by my dog Ace), and the sun changes its apparent color
radically several times during video. It is as if NASA Goddard felt that the beautiful
astronomical research was boring and had to be tarted up. Why not do a scientific
voice-over explaining what is going on? As usual, NASA provides no scale of
measurement on their observations (publish in Unscientific American, then).

Consequently the video appears as science fiction, not real science.

Bird flows as an example of moving data display 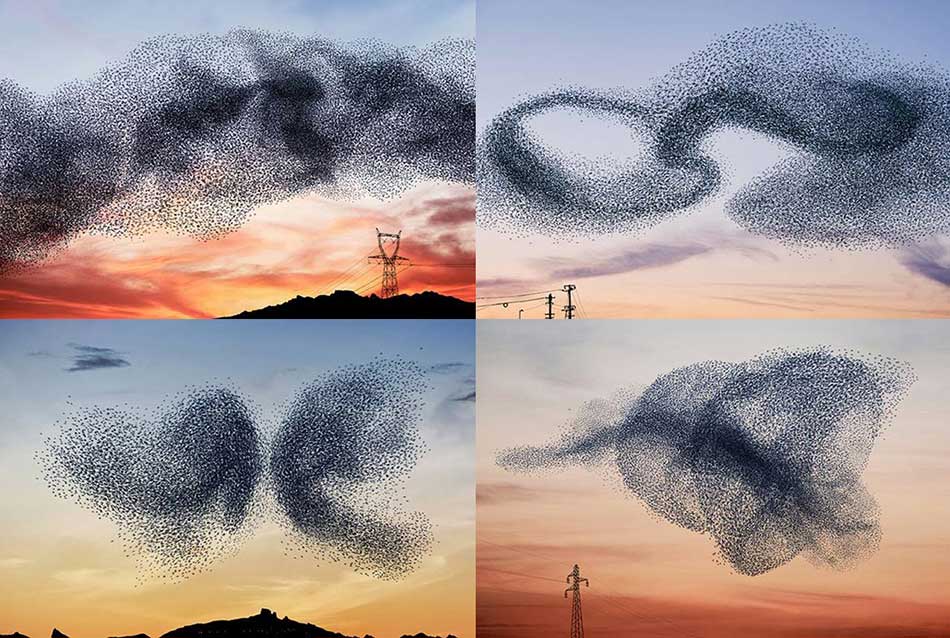 The bird ballet is impressive, but it's a pity they attached that awful music to it: did they think the visual part couldn't stand on its own?

The main visible changes are:

Every swiss map should be updated with the new system prior 2019.

I do not know yet what is my take on this. It seems you can perceive the increased automation. And maybe a bit of 'design by committee' flavor to the new maps. Which seems to result with noiser and less soothing maps. At the same time I am quicker to find infos I'm looking for on the new maps. Could they be less beautiful but more efficient?

Similar to Neels Castillon's filming flocks of starlings, Dennis Hlynsky adds in the dimension of overlapping time to create trails of starlings and these beautiful maps moving in time of their flight.

This video was made with a Lumix GH2 recorder and some editing using After Effects. Using this technique he has also recorded fish, ducks, water striders and other animals and creatures' movement in time.

With regards to the solar coronal mass ejection, and in particular, ET's concerns about changing color and dequantification, I can offer some context. The images are taken from NASA's Solar Dynamics Observatory, in earth orbit, by the Atmospheric Imaging Assembly. You can download these images from the SDO website, and choose any of the AIA telescopes. The numbers refer to the wavelength, in angstroms (0.1nm), of the light. Different elements/isotopes radiate at different temperatures and therefore different wavelengths. Each of these is given a characteristic and consistent color, although a false one (it's all ultraviolet). This explains why the sun changes color through the video.

ET says there's no scale, and while that's true, there are enough establishing shots that we know the size of the flare relative to the sun. Also, given the curvature of the sun and the 3D flare escaping it, an accurate scale may be non-trivial. But more important than the lack of a spacial scale is the lack of a temporal one. Does the flare take hours or seconds? The images from SDO (same link as above) include the timestamp, but are separated by 15 minutes. Wikipedia, in its clear infallibility, states that images are taken every 12 seconds. I haven't been able to find that data.

I agree that the video, as produced, trades mapped images for new age music. I would add timestamps and drop the music in favor of a voiceover explaining the different wavelengths and other content. At the cost of losing the pseudo-3D that is the topic of the thread, one could also tile time vs. wavelength in a grid of small multiples. (I know about the SDO AIA data because I investigated another disappointing use of it, and I can tell that story if anyone wants to hear it.)

This report and video describes an amazing project by Project Tycho that brings together CDC data from many many years to reveal the consequences of vaccination:

The data is said to be openly available. The scientific reports about the data, however, are published in paywalled journals! But it is government data that they scraped. Also the University of Pittsburgh is very aggressive in pointing out that they have trademarked "Project Tycho."