Current Topics | All Topics
Tweet
Flowlines (as in Minard's work)

In Tufte I there was reproduced the remarkable graph showing the exports of French wines for a particular year. It was one of the great graphs of all time, particularly if you are interested in exports. I have been looking for years for some graphics package that could reproduce that graph and show weighted flows over an underlying map, with width of line representing proportionate amount shipped, just as was done in the 19th century. I have found nothing. Any suggestions?

The map of exports of French wine was done in 1864 by Charles Joseph Minard, the creator of the map of Napoleon's March. Long a favorite of mine, this wonderful map is in The Visual Display of Quantitative Information on page 25 (both first and second editions). Note the nice joke in the map: the Strait of Gibraltar has been opened up enormously so all that wine can pass through. The flowline map is also accompanied by time-series plots.

I should have written more about the map in my book and provided a translation of the substantial text. Possibly the logarithm of exports should be plotted. Also the data density of map is quite low; for a serious analysis of exports (many more products, countries), a table will serve much better. Or a country by country matrix for two-way flows.

A. H. Robinson's book, Early Thematic Mapping in the History of Cartography (published in 1982, which the University of Chicago Press appears to have let go out of print) has more on these kinds of maps; and, even better, see Robinson, "The Thematic Maps of Charles Joeseph Minard," Imago Mundi, 21 (1967), 95-108.

A flowline map of this kind could be done in Adobe Illustrator, since any visual diagram can be drawn in Illustrator. Or possibly a GIS program. No matter what the technology such a map will take a lot of handwork; it would be difficult (and largely pointless) to automate this design.

See http://www.math.yorku.ca/SCS/Gallery/minbib.html#Minard:1865e for the bibliography of all Minard thematic maps, with links to many examples, including this one.

The NYT "Enron follies" chart discussed elsewhere is impressive, but today they let the side down a bit with a chart of the fates of military guards accused of abusing their prisoners, that looks at first like a Minard-style flow map, except that the artist doesn't appear to have done anything with the 2D space the flow moves in, or the "time" axis. It might as well have been a pie chart instead. In fact it's not even very easy, for me, to get an idea of the relative volumes from looking at the picture, which is the one thing a pie chart should be able to do.

With the exception of clocks, like the speedy trial clock, justice is typically an event driven timeline, thus the timeline of many cases is better illustrated at various steps in the sequence. I'm no attorney, but I was a legal officer on a ship and this graphic does represent how I perceived the case flow.

An example of a flow diagram, in which some flows rejoin.

Flow of Foods in the United States http://thediagram.com/6_3/flowoffoods.html

Here's a link to a diagram that I found at the end of an article that reminds me of the Napolean March poster:

Re: "I have been looking for years for some graphics package that could reproduce that graph and show weighted flows over an underlying map, with width of line representing proportionate amount shipped, just as was done in the 19th century. I have found nothing. Any suggestions?"

I have exactly the same problem. I am trying to develop an animated visualization of flows of energy commodities and money in the global energy industry over the past century, using data from US-DOE, IEA and others. I need to use flowline-style depiction of these statistics in Minard's best style, but I am having difficulty finding software tools that can do the job without software development specifically for this task.

Do you, Prof Tufte, or your readers have any suggestions? Any comments would be appreciated.

Dear Alex, Did you have a look at Waldo Tobler's Flow Mapper?

I noticed in your post that you are into GIS. I think you will find the Center for Spatial Integrated Social Sciences very useful.

I hope this could be useful for you.

Other solutions could involve: flash or traditional GIS packages with a bit of custom programming. If you are an ESRI user take a look at the support website or the EDN.

Unfortunately flows and geodynamics are not very well implemented in modern GIS.

Visual History of the US Supreme Court

See the intriguing and complex flowline by Nathaniel Pearlman here:

The Dubai police produced a well-designed flowchart of the travels of suspects in and out of Dubai:

Note that the flowlines are labeled by flight information. Just about all lines in all flow diagrams should be labeled, as discussed in the chapter "Links and Causal Arrows: Ambiguity in Action" in Beautiful Evidence.

(If anyone can find a higher resolution image than the poor Newsweek reproduction, please post a link. Thanks.)

Also here are the edited CCTV videos famously put together by the Dubai police. Note some of the hotel and airport CCTV is in HD at not- so-low resolution. Such editing of massive amounts of CCTV footage is only possible when the end of the story is already known.

Professor, a high resolution pdf of the Dubai police chart is available here. There are two charts (both available in hi-res at the link), one details travels in the 2009 planning stages, and the other the 2010 travels for the operation itself.

That took some searching. In the end, I took a chance and searched Google for "travel routes operation stage," which is text that appears on the map itself, as a title. That resulted in only one search result, which is the link above.

I work in a bank research team and we have recently published a piece looking at how we see the world in 2030. Part of this analysis was to compare trade flows now, and in 2030. For this, we took strong inspiration from Minard with the results below. To do this, we had two important changes from Minard's visualisation. First, we wanted to compare trade flows today with trade flows in 2030 (we did this in projected current US dollars). Second, we were not just looking at exports from a single country, but instead the trade corridors between multiple countries and regions. To achieve these two results, we showed now in blue versus projections in green (our corporate colours). For the trade corridors, we split out the trade flows close to each country so that although at each country touch point you can see the width of the line, you can also far more easily track the trade corridors, a problem Minard did not need to solve.

In response to requests for examples of dynamic flow visualizations... I have just launched Economy Map 2.0, which is an interactive, visual map of the US Economy and its environmental and human health impacts, representing the "flow" of 13 different types of impacts among the 480 major industry sectors defined by the US Dept of Commerce. The project introduces a modification of the Sankey method to show how final economic demand for the outputs of certain sectors results in environmental/health impacts being generated by other sectors. The display method makes it possible to trace the flow of impacts among sectors and visually assess each sector's contribution by its shape or "profile." The images below show:

Video explanations of the project are available on the video page of the website. This project is an ongoing research project of TRUTHstudio, and comments, suggestions, and criticisms are welcome. A free download version of the software is also available. 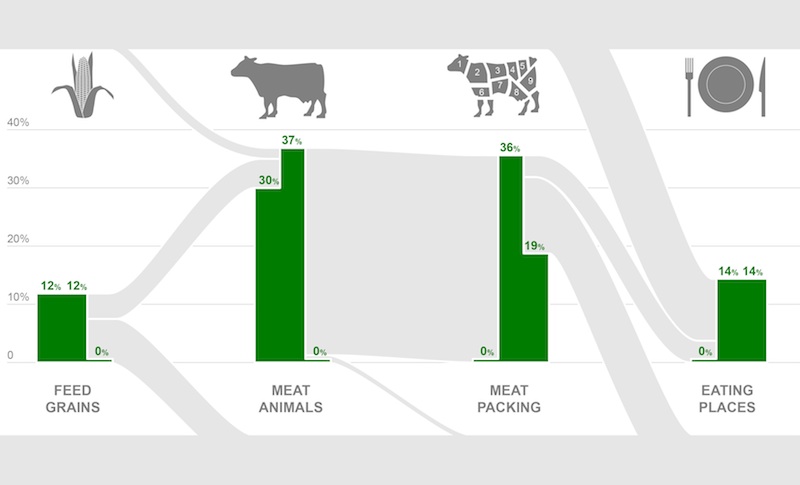 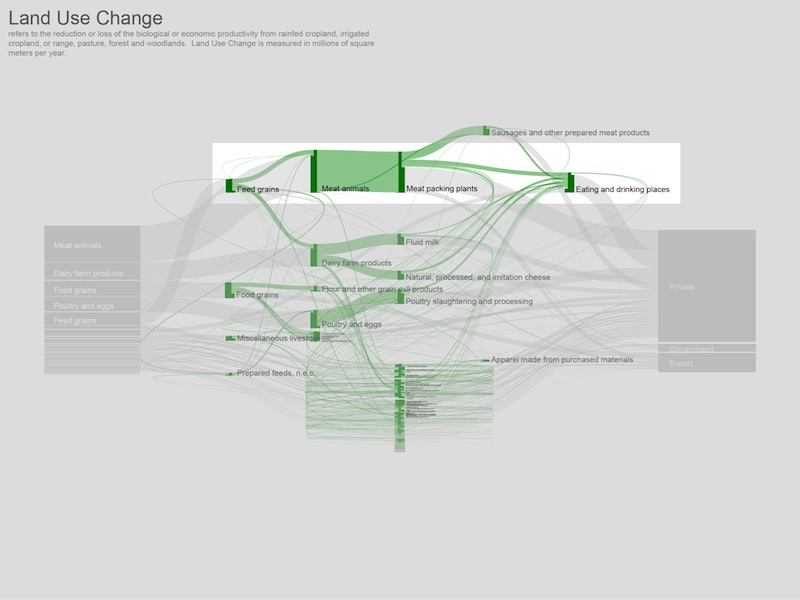 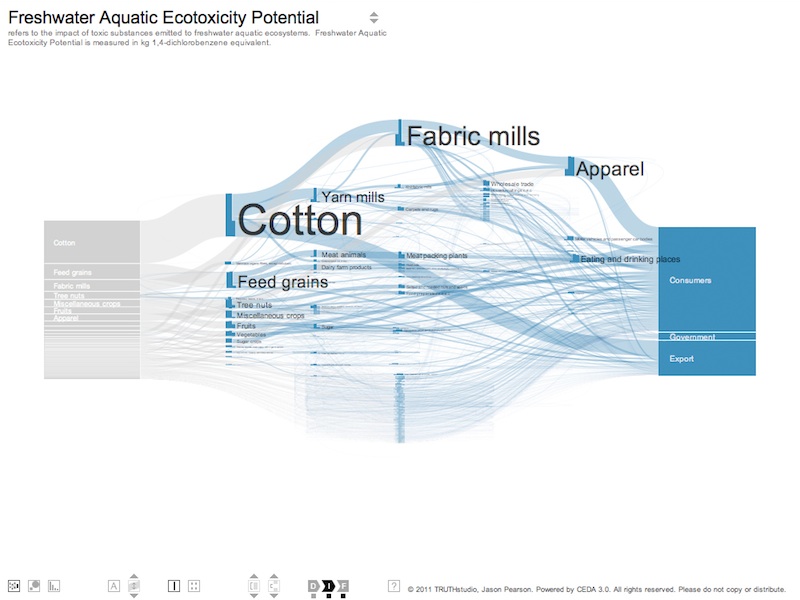 A few months ago, I posted an example of a world map showing trade flows now, and projected forward to 2030. The two series highlighted the shift in the size of such flows (in current dollar terms) and in contrast to Minard's wine chart, showed the flows between multiple countries.

Recently, we were trying to solve a different problem: illustrating not only the flows between countries and regions, but also showing which is the exporting region and which is the importing region. Again, we also needed to show how these flows split out. The result is shown here; blue and green are used as they are corporate colours, with the dark grey highlighting our so-called 'footprint' markets. In this instance, it is crude oil flows that is shown. Any feedback on how this could be improved would be more than welcome.

This was all done in Adobe Illustrator (to answer some of the earlier posts). 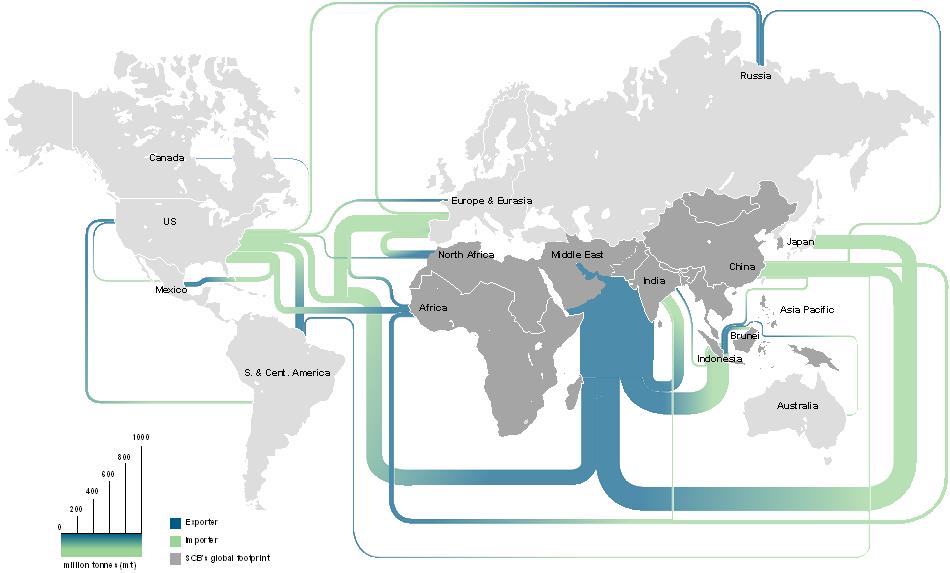