Information comes from somewhere; say where. If you don't say where, then you are saying "Trust me," a phrase which by now has become ironic, and properly so. Documentation and sourcing are part of the fundamental quality control mechanism for the credibility of a presentation. One should be immediately skeptical of presentations that lack adequate sourcing or presentations that contain only tendentious or highly selected, cherry-picked sources. Evidence selection is the single biggest threat to the credibility of a report.

The Guardian has a very strong sentence concerning Prime Minister Tony Blair's claim that Iraq could deploy WMD's within 45 minutes (the "45 minute claim"): "In fact, the foundation for the government's claim was even shakier, according to the document: a single anonymous uncorroborated source quoting another single anonymous uncorroborated source."

Is the source's source a prisoner in Syria making up tidbits as fast as possible to avoid the torture of his children, or is the source's source a high-level official in Iraq? And then what about the source of the source? It makes all the difference. This is exactly why hearsay is dicey. Note the Guardian properly provides their source: "according to the document." The whole article revolves around the credibility of various sources, and it is worth reading by anyone who makes presentations.

Because of this style of analytical reporting, the Guardian has also made it onto the list of choice websites: https://www.edwardtufte.com/bboard/q-and-a-fetch-msg?msg_id=00001O&topic_id=1&topic=

One issue we don't seem to have on the board is a discussion of dirty data. This seems like a good thread for it.

There appears to be a tempest in a teapot brewing around a amateur, though apparently trained, climate analyst and blogger, Steve McIntyre, who has been going through some NASA climate data. It all started when he found that the hottest year was 1934, not 1998, as reported by NASA. Whether warming is the greatest environmental threat is not so much the issue, but the quality of the data and the credibility damage that can be caused by even relatively small flaws. A somewhat humorous, though disturbingly common example of dirty data, which McIntrye cites, is development around weather stations. The stations have to stay in the same place, but people can build around them: 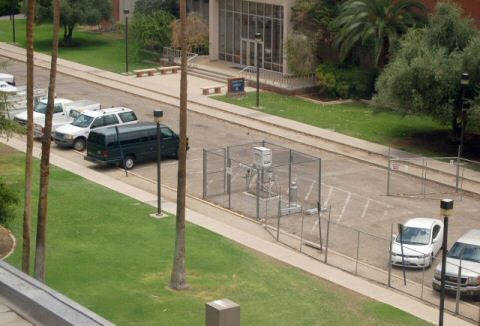 More on climate science. Whomever wrote this article pulled the raw daily temperature data from one of the longest continuous data sets, the Armagh Observatory in Ireland, shows every line of code used, including the exact URL of the data, and plots it. There's a nod to ET at the end.