In 1974 the Federal Energy Administration asked 4 statisticians to provide independent estimates of the amount of oil still underground. The four groups worked completely independently; I found out the names of the other three groups long after the reports were filed. The results, as I recall, were one very low forecast, one very high forecast, and two skeptical reports (including mine) in effect saying the error bound around the forecasts covered all reasonable policy alternatives. Thus the collective result confirmed the views of the two skeptical reports!

Here is my analysis: Forecasting Oil resources. Perhaps this should have appeared as a short case study in Beautiful Evidence, but the idea never occurred to me.

What about now, 36 years later? My skepticism about resource forecasts might be confirmed or might not by a fresh analysis, which would reveal what a fresh analysis of the evidence would reveal. In policy relevant studies of evidence, there is too often a rage to conclude. On this see Beautiful Evidence pp. 154-155:

An excellent piece of analysis.

I would be indeed very interested in you revisiting your analysis 31 years later especially since there is growing furore and scare mongering coming from the "Peak Oil" brigade which was initially driven by "Hubbert's peak".

We all know oil is finite resource and will eventually run out and I beleive current time frames are all in this century for it to "peak" (as for what the curve does after is a matter of debate and analysis). It plausibly, but I cannot verify, makes a huge difference if this has already occured or is some decades away (again this depends on what happens to the curve after the peak and whether there is only one peak...) Since this latest fear and the consequential government policy changes, or lack of them to deal with this, are only going to get more vocal and populist (with inevitable irrationality), some clarity about the quality of the analysis behind the claims would be welcome.

I'd say that skepticism is confirmed by this "collection" of forecasts. See:

Above economics only cause?

Doesn't When peak oil is depend on what the final price is?

The higher the final price the more marginal resources we can dig up therefore altering the total available for mining. Do they really assess all sources regardless of extraction price?

I remember being told in geography class at school (in the 60's) that the tar sands of Athabaska would never be dug up. And now?

So, what I have never seen anywhere is an analysis of what happens to prices as resources get more depleted. I imagine prices go up exponentially as resource declines linearly because of competition. Then at some point crash as better options become economic. And how does people's knowledge of what remains affect what price they will bear?

Personally I think we should save oil for plastics and dyes rather than just burning it.

Here is a link to a very visual and technical book by Cambridge University Prof - David MacKay FRS.

The book is called Sustainable Energy without the hot air. It was published in Dec 2008. The author helped co-fund its publication with ??10,000 of his savings. It is for sale via the normal channels and is downloadable for free for personal use as a PDF from the website (http://www.withouthotair.com/). The author was clearly personally motivated - he is a very intelligent physicist who has spent years on information theory and IT interface tools (see his website for DASHER). What he wanted to do in the energy debate was inject some numerical thinking - as he says; " To make such comparisons, we need numbers, not adjectives."

I suspect that this approach will become the UK governments approach - they just appointed the author as a chief science advisor - and is the approach many NGO's will adopt. It has already become influential - e.g. here is Bill Gates' write up http://tinyurl.com/ybyukdt.

The publisher of the book is a small independent in the Cambridge UK area called UIT - they use LaTeX apparently and have a page layout similar to the LaTeX Tufte class. This is by far their biggest success and hopefully will help keep them going.

Below is a typical two-page spread. 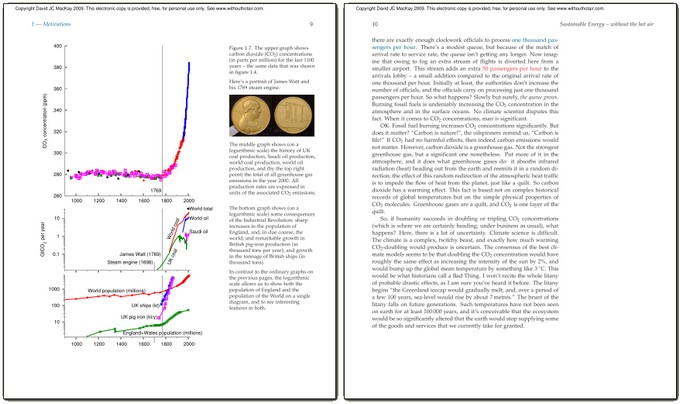