Here are 5 pictures showing dappled light on the stainless steel of various of my
Escaping Flatland sculptures. Dappled light is produced when sunlight is
flitered through the leaves of trees. The dapples result not because tree leaves have
elliptical holes in them but rather because the leaves combine to make many tiny
pinhole cameras, which then produce multiple images of the sun's surface on nearby
projection surfaces. Thus each dapple is an image of the surface of the sun. If there
is a large sunspot on the surface on the sun, that spot will appear within each dapple.

Many intriguing events occur on the surface of landscape sculptures,
as they borrow Nature's light.

Dappled light, explained by M. G. J. Minnaert, in his brilliant Light and Color in the Outdoors.

"Pools of Light" is one of the patterns in Christopher Alexander's "A Pattern Language", a highly-recommended book on "Towns, Buildings, Construction" (the subtitle) and human living and working spaces generally. In the description of this design pattern, Alexander notes that humans evolved in--and therefore seek--dappled light.

The extract is from Minnaert's Light & Color in the Outdoors. On my way in to school this morning the director of the New Orlean Museum of Art was discussing their new exhibit, Femme, Femme, Femme, describing some works that exhibited "dabbled" sunlight. I went in this afternoon. Of the 83 works from 45 French museums, 5 explicitly treated dappled light. Here are some notes:

Albert Fourie, Wedding Breakfast at Yport, 1887 (Musee de Ronen, Ronen). A large, banal outdoor breakfast scene, almost certainly the work that the director, E. John Bullard, referred to on air as arriving in a crate bigger than a FEMA trailer, and considerably more substantial. Fourie used a considerable amount of paint on the canvas and probably in layers as the brushwork is visibly layered on close inspection. The entire party is at a large table under a large tree, I believe a poplar. Large pinnate leaves. The dappled light forms geometric shapes on the table, the people, the benches, the ground, reminding me that Minnaret's treatment above is really a special case: a small aperture. The more general solution is to consider the diffraction of light past edges.

Alfred Guillon, The Pardon of ST Anne Fouesnant Returning to Concarneau, 1887 (Musee des Beaux-Arts Quimper depot Musee d'Orsay) Seven women in white, in a rowboat being hauled up to the beach by men. the water was some wind-blown chop, maybe les than a foot from crest to trough, illustrating the reciprocal bright and dark effects of the changing surface, illustrating a similar effect the receiving surface can have on light.

James Tissot, Luncheon on the Grass (Musee dex Beaux-Arts, Dijon). Dappling, again, with edges. This is a scene of Parisian women in the park with children for lunch on a picnic cloth spread under a tree. The work is small, 8"x6", and one can tell Tissot felt cramped.

Gustave Caillebotte, Portraits in the Country, 1876 (Musee Baron Gerard). 4 women outside a cafe. Caillebotte illustrates the small sun images form small pictures, which he illustrates with a single stroke of a soft, flat brush.

Leon-Francois Comerre, Cycling at Vesinet, 1903 (Musee du Petit Palais, Musee des Beaux-Art de le Ville de Paris, Paris). Comerre only fashions two areas of dappled light in the background of this woman who just got off a bicycle. She is standing at the foot of a trail, with her back to to the water of a pond. The water is where the stipling was, and Cailleotte rendered two spots of dappled light, one in the background and one in the distant foreground. In the distant foreground, the light plays over the water at the near bank of the pond. It looks as though this painting was based on a photograph with a narrow depth of field, and Cailleotte rendered this patch of light as out-of-focus as one can make paint appear.

The patterns are especially neat during a partial solar eclipse, for the Sun is no longer round! See http://wycombeastro.org.uk/eclipse99.shtml for two examples of the cresent dapples.

On the site Norris recommends, these two are the ones he refers to. Potent illustrations.

My book Envisioning Information, pages 18-23, reports the history of displays of
sunspots beginning with Galileo's report of 1613. Galileo describes the possibility that
a very large sunspot may be seen within the sun's image shown by dappled light. Below,
here is what Galileo said about sunspots within dappled light, along with my sidenote
on another one of Galielo's high-spirited responses to those skeptical of his findings.

Below, dappled light reflected from the bottom of a swimming pool of
The Gardens Hotel research labs.

The light path from the sun is elaborate: through the pinhole cameras of the leaves,
then refracted going into the water's surface, reflected from the bottom of the
pool, refracted leaving the water, refracted through something like 9 elements
of glass in the complex lens of the camera, and finally arriving at the camera's
imaging chip.

The dappled light and the reflections from the leaves and flowers of trees overhanging
the pool combine to produce wonderful, luscious, cryptic images.


Dappled light (projections of images of the sun by means of camera obscura formed by tree leaves) on one of the stainless steel Bouquet pieces:

In the image immediately above, the little circles of equal size in the background are not
dappled light physically present in the motif—they are bokeh, a sometimes-desirable
imaging artifact.

For an animation of dappled light moving on the stainless surface of one of the Bouquet pieces, Click to view

Rashomon- if ever there was a use of dappled light to impart vital information as to character and intent that would be my pick....

There is a detailed description of bokeh at <http://www.kenrockwell.com/tech/bokeh.htm>, along with a thoughtful discussion of the balance between art and engineering involved in designing good bokeh in a lens. Be sure not to miss the page linked at the top of the article, which shows examples of the bokeh produced by six different Nikon lenses.

These link to larger stills taken with a Nikon D100. I have some home movie quality video, but as you can see, the demonstration is easily replicated. Note the aperture is a composite created by three edges in three different planes. 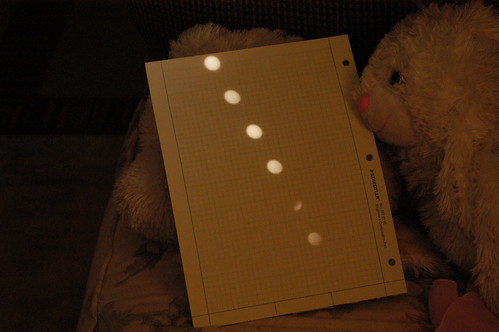 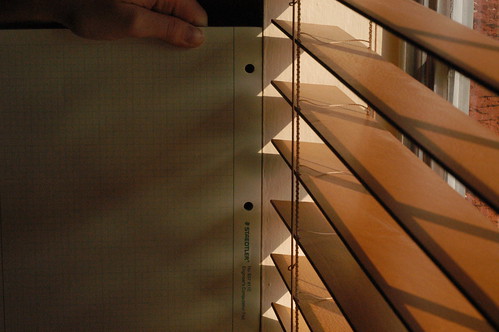 From today's SpaceWeather.com. Note the use of dapple as a verb:

SOLAR ECLIPSE: This Thursday, Feb. 7th, the Moon will pass in front of the Sun, producing a solar eclipse over New Zealand, most of Antarctica and parts of Australia. It is not a total eclipse; the Moon will only partially cover the solar disk. Nevertheless, the event promises some beautiful moments.

For instance, the partially-eclipsed Sun will dapple the ground with crescent-shaped sunbeams. Observers in New Zealand and Australia should look in the shadows of leafy trees for this lovely phenomenon. On the barren slopes of Antarctica, scientists and explorers can produce the same effect by letting the sun shine through a spaghetti colander or a sheet of paper poked with holes.

It is dangerous to stare directly at a partial eclipse because the exposed portion of the Sun is as blindingly bright as usual. Backyard astronomers with safely-filtered solar telescopes may, however, point their optics at the Sun and watch the mountainous lunar limb glide across the sun's fiery surface. (For solar telescopes, see: http://spaceweather.com/ccount.php?linkURL=http://coronadofilters.com/ )

The best views of all are reserved for an remote stretch of the Antarctic where the Moon will pass dead-center in front of the Sun without fully covering it. A thin layer of star will poke out all around the Moon producing a vivid "ring of fire" or annular eclipse.

Visit http://Spaceweather.com for eclipse maps and timetables and, later this week, photos of the eclipse itself.

This may not qualify as dappled light per se, but I've found that the AM sun at my usual vacation spot can have a striking effect on the water.

Yep - watching a near-total eclipse of the sun in the UK (1999) I saw the hundreds of crescents dappled on to my parent's driveway.

From the Boston Globe's coverage of the longest solar eclipse of the century: 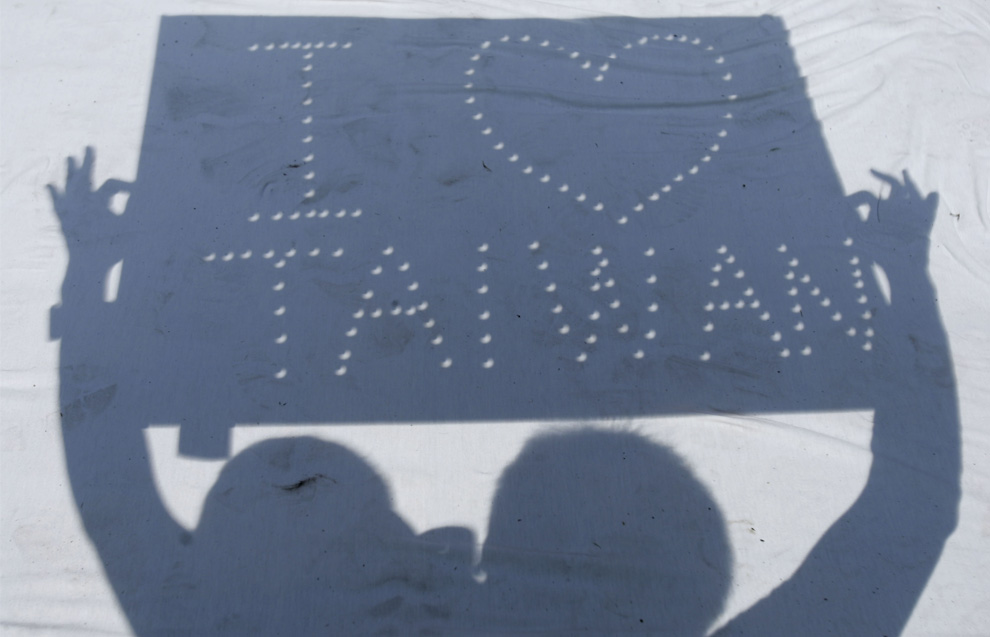